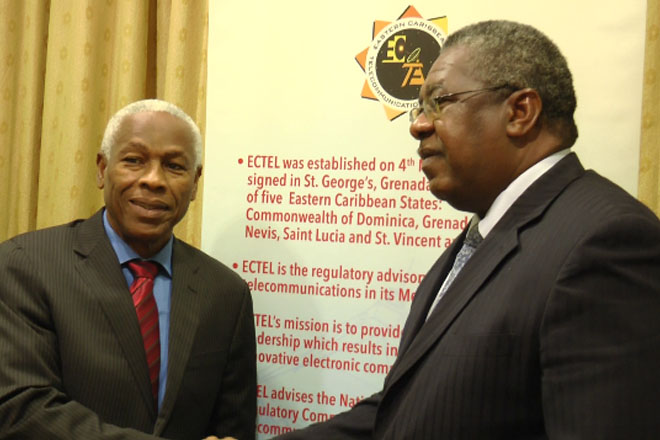 (ZIZ News) – The Council of Ministers of the Eastern Caribbean Telecommunications Authority (ECTEL) is meeting in St. Kitts and Nevis, this week, for the 32nd meeting.

Among the matters being addressed are the ongoing negotiations between ECTEL and Cable & Wireless on measures to mitigate the impact of Cable & Wireless’ merger with Columbus Communications Inc.

On Thursday, at an opening ceremony at the St. Kitts Marriott Resort, Minister of Communication, the Hon. Vincent Byron said St. Kitts and Nevis will most likely be affected by the merger’s challenges.

He said, “These matters that will be discussed here today include the merger of Cable & Wireless and Columbus Communication, in terms of the challenges they are already posing in the Windwards, we may in St. Kitts and Nevis face similar challenges anytime now.”

Chairman of the ECTEL Council of Ministers and Minister of Communication in Grenada, Hon. Gregory Bowen said the merger will likely trigger an increase in telecommunication prices in the region.

“We note that the absence of the Telecommunications Bill; the passage of that bill played in a significant role in the behaviour of the two providers, we are bombarded with a plethora of complaints. Immediately since the merger has been approved, requests for prices increase and not only requests but a demand because so far, as the providers are concerned, there is nothing in law to prevent them from so doing,” Minister Bowen said.

The ECTEL Council of Ministers is responsible for formulating policy for the regulation of the telecommunications sector in the member states of the Eastern Caribbean Telecommunications Authority.