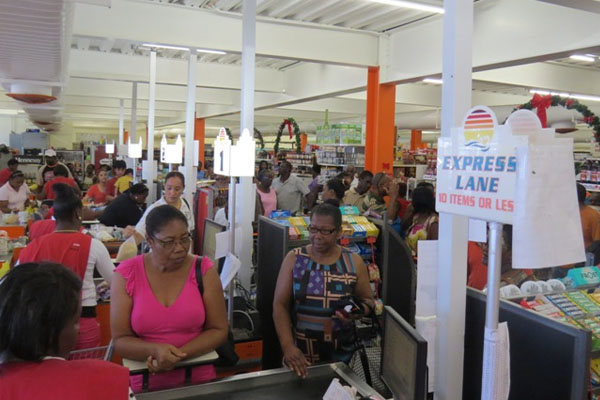 Basseterre, St. Kitts (CUOPM) – Over 100 local companies and businesses and thousands of citizens and nationals showed full confidence in the second Reduced VAT Day on Friday.
Thousands of persons flocked the 110 businesses ranging from variety stores and boutiques to supermarkets and hardware stores all day Friday from early morning to late evening.
Items purchased ranged from vehicles and building material, furniture and appliances to clothing and groceries.

News outlets reported consumers flocked to the stores in Basseterre and around St. Kitts on Friday (Dec. 20) in an effort to take full advantage of the 12 percent reduction in the Value Added Tax.

SKNVIBES reported some of them did not even wait until the business entities were open, as from early in the morning they were seen in orderly lines outside the doors.

By midday and the earlier part of Friday afternoon the streets of Basseterre were filled to capacity with people stepping in and out of stores trying to get their hands on articles needed for the home and other miscellaneous items.

The shoes and clothing stores were filled with shoppers, some to the extent that persons were having difficulty manoeuvring through the dense crowds.

But, the density of the crowd was seen and felt even more at the grocery stores which were filled with to the extent that there was difficulty getting to the items on the shelves.

It was clear that more consumers decided to take advantage of the VAT reduction by doing their grocery shopping.

Some individuals did not participate because, as they claimed, the stores were far too congested and they neither had the time nor patience to wait in line, while others stated that they “have no money”.

One young man said he went into a grocery store to purchase his ham for Christmas Day, but when he saw the hustle and bustle and the line within which he had to wait, he decided against it stating: “I just put back that ham and squeeze out the store.”

The grocery stores saw people sitting on boxes, leaning on walls and trolleys while waiting in extremely long lines to get to the cash registers.

It is said that women are better at sale-shopping than men, and this had proven true on Friday as a number of them were seen making calculated moves at one of the supermarkets.

The ladies, having realised the long lines and busy bodies everywhere, took their trolleys and placed them in the cashier lines and, while one person stayed with each trolley to move it up as the line progressed, the others made their way around the supermarket picking up items and taking them back to the trolleys when their hands were filled.

One woman said that this was to eliminate the difficulty of moving around the supermarket with the trolley and also the long wait in line after shopping.

SKNVIBES concluded that with bags in hand, exhausted bodies and aching feet, the people of St. Kitts journeyed to their respective homes with groceries, shoes and clothing, among a host of other items at seemingly discounted prices.