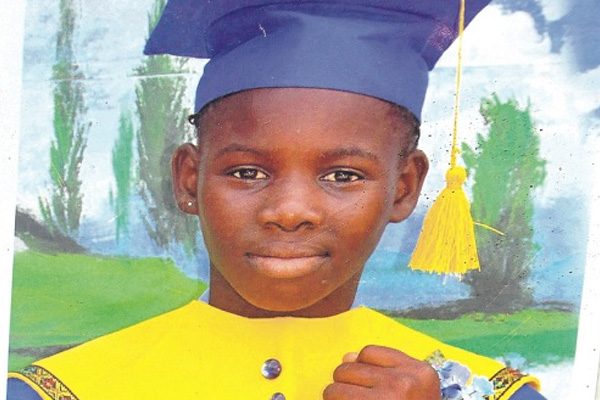 (CMC)– THE farming community of Newlands, St Thomas, was yesterday rocked to its core following the macabre murder of a 14-year-old girl by criminals who hacked the teenager to death and then dumped her mutilated body metres from her house.

Police reports are that about 5:00 am the grade eight student, Kayalicia Simpson, went outside her house as she prepared for school.

It is unclear what prompted her to leave the house, but about half-an-hour after doing so her body was found lying face down in bushes close to the one-room wooden structure in which she lived.

“The body had several chop wounds to the back of the head and neck,” a police source told the Jamaica Observer.

Relatives said that she was in her school uniform when she was killed.

“Have mercy, how people can be so cruel? To come see me niece lay down out there so, still in her uniform blouse,” a relative was overheard saying.

“All now we can’t believe. The little girl go to her bed sound, so we were really left puzzled when we wake up and could not find her,” said Sherika Sinclair, a cousin of the slain child.

She added that her world came crashing down when she heard that Kayalicia, who had dreams of becoming a teacher, was found dead.

Sinclair made the comment metres away from where a small group of residents gathered, whispering among themselves as news of the killing circulated. The gruesomeness of the girl’s death triggered shock and anger in the normally quiet, rural community which sits near the town of Yallahs in the eastern parish.

As the cries went out in the community, 53-year-old Eloise Brown, the grandmother of the dead child sat on the step of her neighbour’s house and rocked back and forth, holding a piece of cloth as if it was her granddaughter.

“Look how dem kill off mi grandpickney. Me nuh walk and trouble people; she was a girl who took to her books and this is what dem do har,” said Brown as her voice trembled.

The St Thomas police yesterday said that they would be steadfast in their search from the girl’s killer(s).

“We will not leave any stone unturned in the search for the person responsible for such an act,” a senior police officer told the Observer. No motive has been established for the killing.

In the meantime, Kayalicia’s death has drawn howls of condemnation. Opposition Leader Andrew Holness urged the Government to “move quickly” to address the spate of attacks against women and children, saying that condolences cannot “bring back our children”.

“We cannot continue in a situation where so many of our children, especially young girls, are the victims of these gruesome acts. We have seen too many. This is not just a matter for the police as we, as Jamaicans, must play our role in turning in all the criminals, especially those that prey on our women and children. The Government is failing in its role to protect our children as it seems, instead of getting better, the situation is getting worse,” Holness said as he challenged every Jamaican to turn over criminals they know to the police.

Education Minister Ronald Thwaites said that the community must assist in bringing Kayalicia’s killers to justice, while the Child Development Agency (CDA) said that the wanton assault on the nation’s children continues to be a blot on the collective conscience of the society.

The fact that this murder comes such a short time after the killing of several youngsters since the start of 2015 is an indication that communities need to deepen co-operation with State agencies on stronger action to curb and eliminate violence against our children, the CDA said in a statement.

“It is time that all well-thinking Jamaicans take a stand to reject violence against children in all its forms, by better guiding and protecting our youngsters, instilling in them proper values to make right choices, and exposing the perpetrators of these vile criminal acts so they can face the full force of the law. As long as some citizens treat child abuse as normal and acceptable, our children will be in grave danger of losing not only their childhood, but their very lives,” the CDA urged.

The CDA said that its first responders are on the ground in St Thomas “providing counselling and other forms of support to those directly affected by this vicious act”.