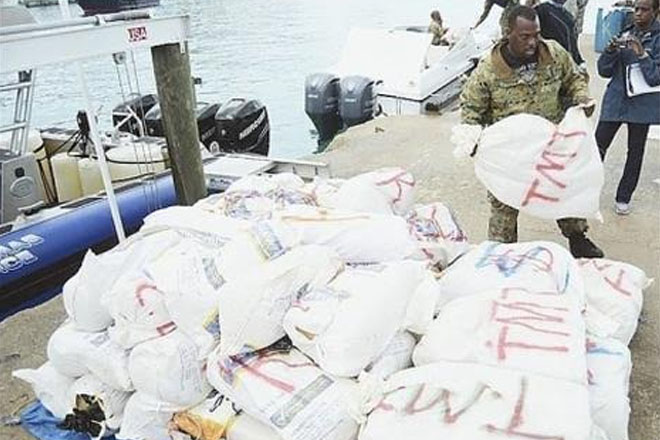 $2.5 million drug bust in The Bahamas

Nassau, Bahamas — A joint task force from Operation Bahamas, Turks and Caicos (OPBAT) seized 2,842 pounds of marijuana worth an estimated wholesale value of over $2.5 million during three separate law enforcement operations in The Bahamas last weekend.

The OPBAT task force is comprised of elements from the US Coast Guard, Drug Enforcement Administration (DEA), US Customs Border Protection Office of Air and Marine (CBP-OAM) and the Bahamas Drug Enforcement Unit (DEU), a division of the Royal Bahamas Police Force.

A deployed Coast Guard MH-60 helicopter aircrew launched and supported DEA and DEU agents during the interdictions. In addition to the narcotics seized, two smuggling vessels and a vehicle were taken into custody, and a total of six suspects were arrested.

The seized go-fast vessels and contraband were eventually escorted to Nassau, Bahamas, for further processing.

“OPBAT remains vigilant in its mission to protect citizens of both the US and Bahamas,” said Cmdr. Mark Driver, Coast Guard OPBAT director. “The strong partnership US and Bahamian forces enjoy creates a potent deterrent to criminal activity and has resulted in the seizure of over 45 tons of narcotics since October 2014.”

OPBAT is a combined DEA, Coast Guard, CBP-OAM and government of Bahamas partnership to combat drug smuggling to and from the Bahamas. The OPBAT Operations Center in Nassau is responsible for initiating and prosecuting law enforcement cases in the Bahamian area of responsibility (AOR). In addition, OPBAT assets regularly assist with prosecuting human smuggling and search and rescue cases throughout the AOR.