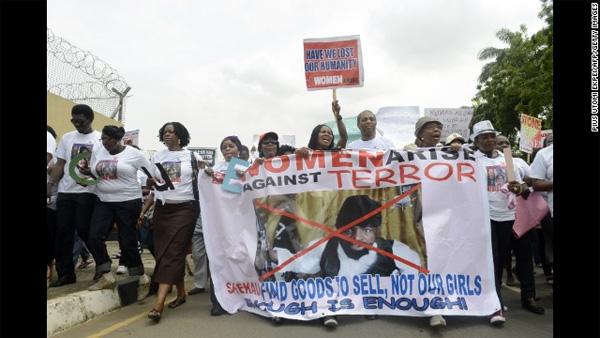 Kano, Nigeria (CNN) — Sixty-three women and girls kidnapped by Boko Haram last month in Nigeria escaped from their captors and have returned to their burnt village, a security source and a local vigilante fighting the militant group said.

The hostages were seized from the Kummabza village in northern Borno state on June 18 after a four-day invasion of the village by Boko Haram insurgents. The militants killed 30 men and burned the entire village.

The group is still believed to be holding over 200 schoolgirls abducted April 14 from their hostels in the town of Chibok — a case that drew international outrage and prompted a global campaign for their release.

Bukar Kyari, a local vigilante fighting Boko Haram in Maiduguri, said the female hostages escaped Friday while their captors left their camp to launch an attack against the military and police in nearby town of Damboa.

But soldiers overwhelmed the insurgents, forcing them to mobilize all their men and leave the abducted women in the camp, Kyari said.

“The women seized that rare opportunity to escape when they realized they were alone in the camp,” Kyari said. “But we still have five women, including a nursing mother, missing.”

News of the escape was slow to emerge due to trouble with telecommunications towers in the area destroyed by previous Boko Haram attacks.

Boko Haram has recently intensified abductions of women in northeastern Borno state where its five-year insurgency is largely concentrated.

When a group of women and girls abducted in November were later rescued from Boko Haram, some were pregnant or had children. Others had been forcibly converted to Islam and married off to their kidnappers.

The name “Boko Haram” translates to “Western education is sin” in the local Hausa language. The militant group is trying to impose strict Sharia law across Nigeria, the most populous country in Africa.

Its ambitions have apparently expanded to the destruction of the Nigerian government.

On Friday, at least six troops, five police officers and 53 Boko Haram fighters were killed after the militants launched an attack in the town of Bama, the Nigerian defense ministry said.

Local residents said half the town was burnt, including the police station.

Many of Boko Haram’s attacks take place in the northern part of the country, despite the fact that Nigeria’s northern half is mainly Muslim and the south is mainly Christian.

But the radical militant group does not consider all Muslims as supporters and allies. Boko Haram has allegedly killed Muslim clerics who have dared criticized the group.

And there have been suggestions that it attacks certain mosques because members have spoken out against it and helped federal officials with their crackdown. Analysts say attacks are aimed at instilling fear in the local population to prevent cooperation with the government.