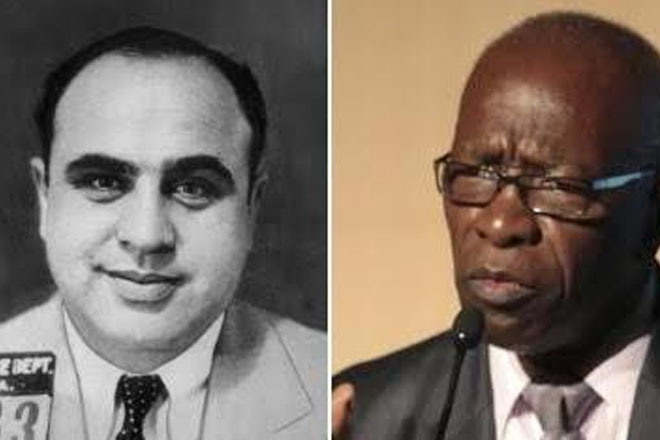 Port of Spain, Trinidad — Al Capone, the Chicago gangster during the Prohibition era, whose name is synonymous with organised crime in America, was charged with numerous criminal offences ranging from vagrancy to murder. However, the only conviction ever obtained by the government was for tax evasion, for which Capone was sentenced to a then record 11 years in federal prison.

Legally, Capone’s profits from criminal activity did not have to be entered on a tax return until 1927, when the Supreme Court ruled that illegally earned income had to be declared.

Embattled Trinidad member of parliament and former FIFA vice president Jack Warner may well find himself in a similar predicament.

According to the 164-page indictment in United States vs. Jeffrey Webb, et al, in which Warner and other senior FIFA officials are charged with multiple counts of racketeering, money laundering and wire fraud involving $150 million, Warner, although a citizen of Trinidad and Tobago, was also “between approximately 1993 and 2013, a legal permanent resident of the United States”.

This means during the time he was allegedly receiving millions of dollars in bribes and other illicit earnings he had extensive US reporting and taxation obligations in relation to his worldwide income.

As a US lawful permanent resident (“green card” holder), Warner was automatically a US tax resident. US tax residents must declare their entire income to the US government’s Internal Revenue Service (IRS), no matter where the income was earned. As of 2012, they must also report certain information about foreign financial assets.

As a green card holder, Warner should have declared income both within the United States and any money that he received from investments or business activities carried on outside US borders.

As the US Supreme Court ruled as long ago as 1927, illegally earned income has to be declared.

Warner may therefore be called on to account for the various transfers the indictment alleges were made to him or to accounts he controlled.

Specifically, the Traffic Group, a multinational sports marketing company involved in the purchase and sale of media and marketing rights associated with football in the United States and other parts of the Confederation of North, Central American and Caribbean Association Football (CONCACAF) region, bought rights to Caribbean home World Cup qualifiers from the Caribbean Football Union (CFU), then bought the rights to Trinidad’s home qualifiers, which it already owned, from the Trinidad and Tobago Football Association (TTFA). Traffic then diverted payments to a Warner-controlled account.

In one of the examples, for 2006 World Cup qualifiers, Traffic USA paid the CFU $900,000, and then agreed to pay the TTFA $800,000 for rights it already owned and wired the money to an account in Trinidad and Tobago that Warner controlled. For the 2010 World Cup, Traffic USA paid the CFU $2.2 million, and then paid Warner-controlled accounts $800,000 for the same rights.

Hours after arriving in Paris, co-conspirator #14 boarded a return flight and carried the briefcase back to Trinidad and delivered it to Warner.

Soon after receiving these wire transfers, Warner allegedly caused a substantial portion of the funds to be diverted for his personal use. For example, on January 9, 2008, Warner directed Republic Bank to apply $200,000 of the $616,000 that had been transferred into a CFU account from FIFA one week earlier toward a personal loan account held in his name.

Warner also diverted a portion of the funds into his personal accounts by laundering the funds through intermediaries. For example, during the period from January 16, 2008, to March 27, 2008, Warner caused approximately $1.4 million of the $10 million to be transferred to a Trinidadian businessman, and a large supermarket chain in Trinidad and Tobago controlled by the same businessman. Weeks later, cheques totaling approximately the same amount and drawn on an account held in the name of a Trinidadian real estate and investment company also controlled by the same businessman, were deposited into a bank account held in the name of Warner and a family member at First Citizens Bank in Trinidad and Tobago.

On July 14, 2011, co-conspirator No. 7, whose description matches that of Mohamed bin Hammam at Qatar, then president of the Asian Football Confederation, caused $1,211,980 to be wired from an account he controlled in Qatar to a Citibank account for credit to Warner’s account at Intercommercial Bank in Trinidad and Tobago.