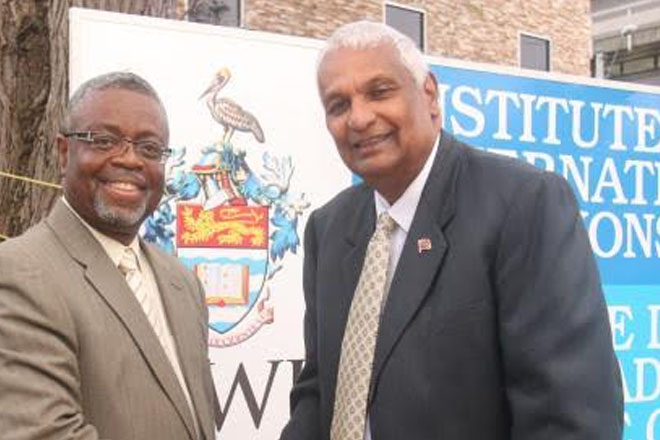 St Augustine, Trinidad — On Friday August 21, the Diplomatic Academy of the Caribbean hosted an evening reception to celebrate one year of achievements since its 2014 launch in Trinidad and Tobago. The gathering included guests from the diplomatic corps, current and past students of the Academy, and friends in the local diplomatic community.

The evening’s highlight was the official opening of the Academy’s new building at the University of the West Indies (UWI) St Augustine Campus.

During his feature remarks at the reception, Winston Dookeran, minister of foreign affairs of Trinidad and Tobago said, “The world diplomatic challenges are moving and that is why we believe that the Diplomatic Academy of the Caribbean which has been set up here, has a clear mandate for the future. It is in that context, therefore, that the perspective for setting up this Academy in the University of the West Indies has in fact found its place in shaping that future for the conduct of our diplomacy.”

He added, “To conduct diplomacy in a manner that is consistent with the new science of diplomacy, we decided to build an institution.”

The Academy is a joint project between the government of Trinidad and Tobago and its ministry of foreign affairs, and the university. Envisioned as a facility that would provide high quality learning and training for governments, businesses and citizen diplomats from all countries across the Caribbean, the Academy has already equipped over 300 persons to better represent the region’s interests in the international arena through its courses and practical training exercises led by global diplomatic experts.

A key feature of the Academy is its successful collaborations with regional and international organisations and governments including the Caribbean Community (CARICOM), the Association of Caribbean States (ACS), the International Labour Organisation (ILO) and the government of Argentina.

Marcelo Salviolo, ambassador of Argentina to Trinidad and Tobago, was also invited to speak at the reception. He described the Academy’s module Looking towards Latin America: Growing Together, which was hosted in collaboration with the government of Argentina earlier this year as “a landmark in the history of academic cooperation between Latin America and the Caribbean”.

He continued by saying, “There is truly a need for more collaborations of this nature between Latin America and the Caribbean, as they not only allow the exchange of knowledge and expertise among our diplomats and foreign service experts, but they also create opportunities to learn from one another and share our experiences on a more intimate level, which would ultimately translate in greater understanding of each other and improved cooperation on a bilateral and regional level.”

Also speaking at the reception, Professor Clement Sankat, pro-vice-chancellor and principal of the St Augustine Campus, stated, “Today represents yet another milestone achievement for our Campus and University, as we officially open the doors to the new building which will house our young, but very distinguished and dynamic Diplomatic Academy of the Caribbean. While the Academy is indeed an integral part of our Institute of International Relations, it has a separate identity and specific mandate to strengthen the diplomatic capacity of our countries which is critical to the international advancement of our entire Caribbean region.”

Over the past year the Academy has been operating from teaching spaces across the St Augustine Campus. The new home for the Diplomatic Academy of the Caribbean adjoins the UWI’s Institute of International Relations and houses the Academy’s Secretariat and includes classrooms, breakout rooms, and a board room and television studio among other amenities.

Professor W. Andy Knight, director of the Institute of International Relations, described his vision for the Academy, saying it will be “a premier training and learning facility, on par with any other diplomatic school in the world. The Diplomatic Academy of the Caribbean is poised to reinvent diplomatic education and training to drive a better economic, social and cultural Caribbean future and enable a greater contribution to world affairs.”