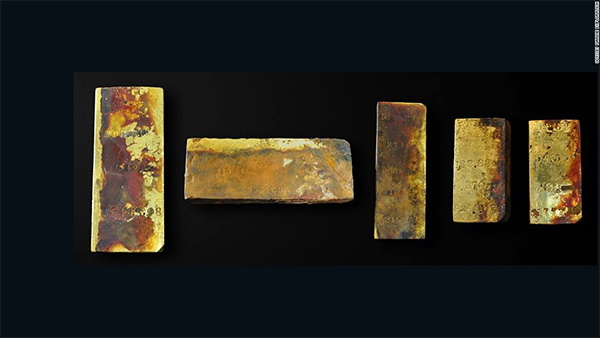 (CNN) — Tommy Thompson was an ocean explorer, an entrepreneur, an author and a diver for sunken gold.

So when he dropped off the map in 2006, many wondered what had happened.

The feds say they know. Thompson, they say, was also a multimillion dollar scammer who went on the lam rather than pay back his investors after he found millions in treasure at the bottom of the Atlantic.

To cover their tracks, Thompson and Alison Antekeier, his girlfriend, used false names, the U.S. Marshal Service said. And they allegedly paid for everything in cash.

They likely had plenty of it.

Speculations of what the gold loot was worth, and money they allegedly hijacked from investors, have run into the hundreds of millions.

The Marshal Service finally caught up with the pair Wednesday. They found Thompson in a room at a Florida Hilton hotel, where he and his girlfriend had hidden in plain sight for a year.

He will appear in a Florida federal court Thursday.

Thompson, an oceanographic engineer from Columbus, Ohio, was fascinated by the SS Central America, a side-wheeler steamship that sank off the coast of North Carolina in 1857.

More than 400 people drowned in the throes of the hurricane that wrecked it.

Officially a mail ship, it had left San Francisco flush with coins, bars, nuggets and dust just a few years after the California Gold Rush. Tons of it, Thompson wrote in a book about his quest.

He was determined to scour the depths of the ocean for its loot with a cutting edge robotic submarine.

In the 1980s, he began infecting investors with his dream, and they fronted him funds to help him realize it, according to a report by Forbes Magazine. The report put his unconfirmed fundraising target at $55 million.

He spent it on a team of scientists, engineers and crew, who sailed aboard a ship equipped with sonar and the robotic submarine, which they called Nemo.

And Thompson hired historians, who documented the ship’s history and artifacts.

Years later, Nemo arrived at the ocean floor at the wreck of the Central America. Some of the gold, which lay sunken for over a dozen decades, made its way to the surface.

In 1998, Thompson published photos of it and other artifacts in America’s Lost Treasure, full of scholarly and technological details. He commissioned a documentary, Forbes wrote, and sought the attention of the media.

His stakeholders feared he had run away with their investments and with perhaps even more millions made from the sale of gold coins.

They sued, but he and Antekeier skipped out on multiple hearings, the U.S. Marshal Service said. Counsel representing them stood in court without them.

In 2012, federal authorities issued arrest warrants for the couple. Thompson and Antekeier ducked out of sight, and were last spotted in Vero Beach in 2013.

“It appears they have known they were wanted and were doing anything they could do to cover their tracks,” U.S. Marshal Barry Golden told CNN affiliate WPTV.

As officers tracked Antekeier on Tuesday, she allegedly went from a taxi to a bus then walked about a mile on foot.

The couple read up on how to evade authorities, and it worked, the feds said. Marshals investigated around the globe for them.

Then on Wednesday, they found them in the West Palm Beach hotel room. Thompson and Antekeier told officers they knew they had been searching for them.

The couple went with marshals peaceably.