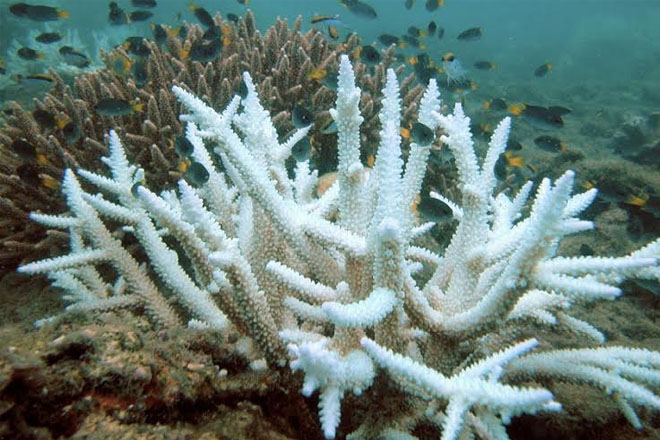 Queensland, Australia — The biggest mass coral destruction event ever recorded could be underway in the third major global bleaching of the underwater ecosystems, researchers have warned.

The United States National Oceanic and Atmospheric Administration (NOAA) has confirmed that the bleaching, which has hit reefs in the Caribbean, Atlantic and Pacific, may affect over 38 per cent of the world’s reefs, and kill over 12,000 sq km of them.

Coral bleaching occurs when coral is exposed to high temperatures and excessive sunlight. Warm temperatures cause brown algae within the body tissues of coral to produce toxic compounds rather than energy. This causes the coral to expel the algae and turn white, according to Wired.

Bleaching is not necessarily fatal if the coral has time to recover. But rising ocean temperatures coupled with the current El Niño system means some reefs have experienced near-fatal temperatures for more than 12 months.

BBC News reports that the current worldwide bleaching episode is predicted to be the worst on record as the warming Pacific current, El Nino, increases in strength. Water temperatures are being driven further by a separate natural warm-water mass dubbed the Pacific Blob.

Man-made climate change also contributes, as the oceans are absorbing about 93 per cent of the increase in the earth’s heat.

Corals also face ocean acidification as CO2 emissions are absorbed into the oceans, changing the pH of seawater.

Other threats include pollution, over-fishing, sedimentation and damage from boats and unregulated tourism-related activities.

Some scientists are warning that spectacular reefs as we know them – with branching corals and fan corals – are unlikely to survive changes in temperature and pH by the end of this century. That’s if they are not killed first by other damaging local activities.

The current bleaching episode was predicted by NOAA and confirmed by researchers and citizen scientists in the Caribbean. The main groups involved are XL Catlin Seaview Survey, the University of Queensland, and Reef Check.

While reefs represent less than 0.1 per cent of the world’s ocean floor, they help support about a quarter of all marine species. NOAA says the livelihoods of 500 million people and income worth over US$30 billion are at stake.

Reefs are the breeding ground for tropical fisheries. They also provide shelter from the waves for tropical islands and bring invaluable tourist income.

“Just like in 1998 and 2010, we’re observing bleaching on a global scale, which will cause massive loss of corals. With people relying on fisheries and reefs for sustenance, the repercussions could be potentially disastrous,” said Professor Ove Hoegh-Guldberg, lead researcher at the Global Change Institute at the University of Queensland.

Professor Rupert Ormond, Secretary of the International Society for Reef Studies, told BBC News: “Although corals may live for several days after they bleach, they then usually die. They may recover – but only if the sea temperature drops within a week or so. Mostly it takes much longer, so the reef ends up covered with dead corals, especially on its upper parts.

“The reefs may slowly recover if new coral colonies come in from outside, but this may take years or decades. I know coral reefs in Kenya that lost most of their corals in 1998 and they still only have a few per cent of the corals once there.”

Coral bleaching was first seen by researchers in 1979, but in a localised area. Then in 1998 the first global bleaching killed 16 per cent of the world’s corals. The current global cycle could be as bad, if not worse.

“It’s a very new phenomenon, and it’s been growing worse and worse. The time between global bleaching events is shortening […]. We’re getting to the point that it doesn’t take an El Niño to get you beyond the threshold for coral,” Hoegh-Guldberg told Wired.

“That has most of us very worried.”

The current El Niño is one of the four strongest since 1950 and is also responsible for rising air temperatures. This year and next are set to be the warmest years on record due to El Niño, recently released figures revealed.