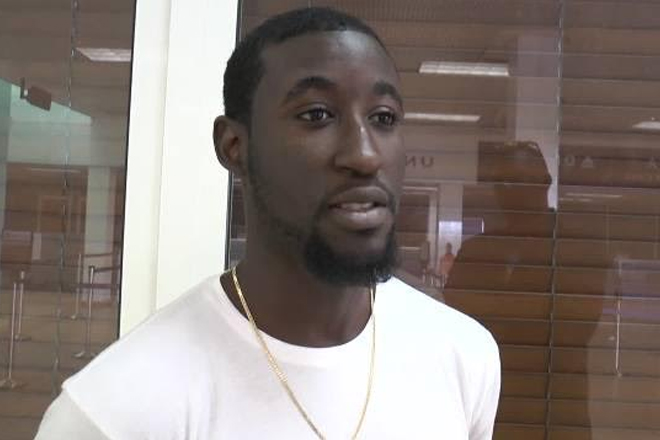 He was met at the airport by Public Relations Officer of the St. Kitts-Nevis Amateur Athletic Association Evris Huggins who wished him well.

While speaking with ZIZ News, Williams said while he will be pursuing studies in Physical Therapy, he plans to ensure that he excels in athletics as well, noting that he already has his eyes set on breaking his school’s javelin record and will be undergoing intense training to achieve that goal.

He spoke of how Williams was able to secure the scholarship, noting that he had worked closely with sports enthusiasts while studying in Trinidad.

“Initially, the scholarship was a partial scholarship and I think she worked some more and was eventually able to get a full scholarship at South Plains College. He has been in contact with the coach quite often and I have been trying to give him some tips and ideas and support to make that today came to fruition,” Blackett said.

Adrian Williams won the 2010 Carifta Games event with a distance of 57.86m in the Cayman islands, winning the first Carifta gold for St. Kitts – Nevis in seven years. He set the under-17 TDC Interschool Championship record of 56.48m at a meet held in St. Kitts.

In 2011, he accomplished a feat never before performed by an athlete of St. Kitts-Nevis, when he established a new record at the Carifta games. He also established another first for St. Kitts-Nevis at the 40th staging of the meet, winning back to back gold medals (in 2010 & 2011) in Montego Bay, Jamaica.