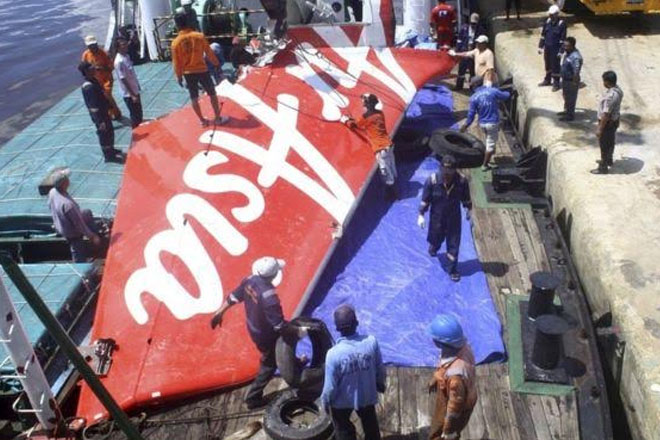 (BBC) Faulty equipment was a “major factor” in the AirAsia plane crash last December that killed all 162 people on board, Indonesian officials say.

The plane’s rudder control system malfunctioned four times during the flight – a fault that occurred 23 times in the preceding year, officials said.

Their report added that the crew’s response contributed to the disaster.

Investigators had initially indicated that stormy weather was a major factor in the crash – however, they now say that this was not a cause.

The new report from the National Transport Safety Committee, released after a year-long investigation, found that the soldering on a tiny electronic part in the system that controlled the rudder was cracked, causing it to send four warning signals to the pilots.

The crew tried to fix the problem by resetting the computer system, but this disabled the autopilot. They then lost control of the plane.

The plane then entered “a prolonged stall condition that was beyond the capability of the flight crew to recover”, the report said.

Maintenance crews were aware of the problem as it had occurred 23 times in the past year, and resetting the system was one of several methods used previously to address it, the report said.

Inadequacies in the maintenance system had led to “unresolved repetitive faults occurring with shorter intervals”, it added.

The report does not apportion blame or liability, but is intended to help the industry avoid future accidents.

She told the BBC’s Indonesian service: “The report today brought back all the trauma, grief and loss… I don’t want to be angry with AirAsia, what’s the use of anger? In the end it will only hurt me and stop me from moving on.

“We accept Allah’s plan for us. But I do want the government to make sure it doesn’t happen again. Don’t let the disaster of 28 December ever happen again.”

Malaysia-based AirAsia’s Chief Executive Tony Fernandes said: “There is much to be learned here for AirAsia, the manufacturer and the aviation industry.”

“We will not leave any stone unturned to make sure the industry learns from this tragic incident.”

Since the crash, AirAsia had carried out 51 measures to improve safety standards, the report said.

Meanwhile, an Airbus spokesman said: “Airbus has just received the final accident report. We are now carefully studying its content. With safety being top priority Airbus is fully committed to push the safety track record of our industry even further.”

The plane’s wreckage was found days after the crash at the bottom of the Java Sea near Borneo.

Most of the passengers were Indonesian, and others on board included a French citizen, a Singaporean, a Malaysian, a Briton, and three South Koreans.

Only 106 bodies have been retrieved so far.

The crash came at the end of a year of major air disasters, including the disappearance of MH370 and the shooting down of MH17- both flights operated by Malaysia Airlines.