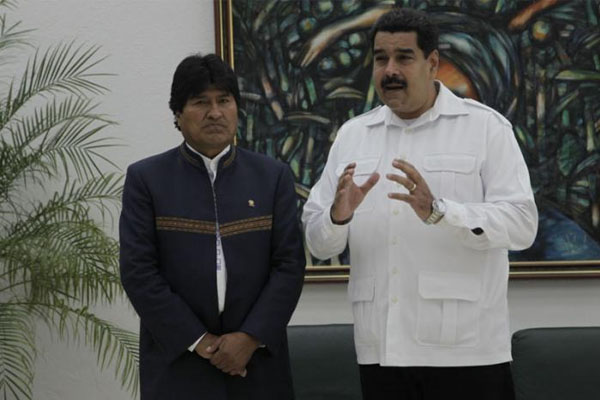 ALBA summit on Ebola was a success, say leaders

Havana, Cuba — Presidents Evo Morales of Bolivia and Nicolas Maduro of Venezuela agreed on the success of a recent summit of the countries within the regional bloc known as Bolivarian Alliance for the Peoples of the Americas-Commercial Treaty of the Peoples (ALBA-TCP), which addressed a joint strategy against the Ebola virus.

Answering questions from journalists after the summit, Maduro said that the meeting was fair, on time and successful. He referred to the setting up of a common front and fast action brigades in case of emergency in the ALBA countries.

The Venezuelan president said that the countries of the region need strong public health systems and consider health as a human right and not a merchandize. He added praised the fast reaction of the countries following the call to the meeting, the high quality of the forum and he noted that the most important conclusion of it is that public systems in the region must be strengthened.

Meanwhile, Morales stressed that what is taking place now is the fight for life, disregarding ideological differences among countries, since life comes first, and the forum came up with a plan of action not only for the ALBA countries but for all the Americas and the world.

At the summit, top UN officials said Ebola is no longer a localized public health emergency, as they commended Cuba for sending doctors and nurses to the affected countries in West Africa, and addressed regional leaders gathering to discuss ways to resolve the emergency and halt spread of the virus to regional states.

Speaking on behalf of the UN secretary-general at the summit, Dr David Nabarro, the secretary-general’s special envoy on Ebola, said cooperation and solidarity are essential, and Cuba and Venezuela, with their contributions, have already demonstrated this.

“I urge countries in the region and around the world to follow the lead of Cuba and Venezuela, who have set a commendable example with their rapid response in support of efforts to contain Ebola,” he said.

Saying that Cuba’s solidarity with other developing countries is well established, Nabarro commended the government of the Caribbean island for dispatching a team of 165 medical aid workers to West Africa in early October.

Venezuela has also joined efforts to combat Ebola by contributing $5 million to the UN Ebola Response Multi-Partner Trust Fund, which supports the needs and requirements of UN agencies, funds and partners working to eliminate Ebola in West Africa.

“[Ebola] has wide and profound economic, humanitarian, political and security dimensions. We must act decisively to relieve the burden on the people and governments of Guinea, Liberia and Sierra Leone and stop the spread of Ebola to other countries,” said Nabarro.

“By convening this timely summit, ALBA member states can substantially assist in attaining these objectives. I wish you a productive meeting,” he added.

Joining the forum via video, Dr Margaret Chan, the head of the World Health Organization (WHO), told participants, “You are absolutely doing the right thing. You want to step up your level of preparedness.”

“Last month, the Ebola virus moved to your region… to the United States… any country with an international airport is theoretically at risk of an imported cased of Ebola,” she said.

She thanked Cuba for contributing the much-needed nurses and doctors to affected countries. The staff in their “sparkling white lab jackets brings a most welcomed face of hope to what is otherwise a horrific outbreak,” Chan added.

The virus is deadly. The disease is dreadful. People are afraid. At the same time, a well-prepared country can defeat Ebola.

Countries in the Bolivarian alliance need to train their staff, use drills to test performance, get protocols written quickly, get your public and media behind you, engage the community early to fight fear with facts. On its own, protective gear is not fool proof, she said.

On Monday, WHO officially declared Nigeria free of Ebola virus transmission, after 42 days without a single case. In a statement, the WHO called it a spectacular success story that shows that Ebola can be contained.

Such a story can help the many other developing countries that are deeply worried by the prospect of an imported Ebola case and eager to improve their preparedness plans. This announcement comes only a few days after Senegal was also declared to be Ebola-free.

Strong public awareness campaigns, teamed with early engagement of traditional, religious and community leaders, has played a key role in successful containment of this outbreak.

On the funding front, the trust fund set up by the secretary-general for the Ebola response, now has $8.8 million in deposits and $5 million in commitments.

In total, $43.5 million has been pledged and the secretary-general continues to urge countries to turn these pledges into action as soon as possible. All numbers are available on the Ebola Multi-Partner Trust Fund’s website.