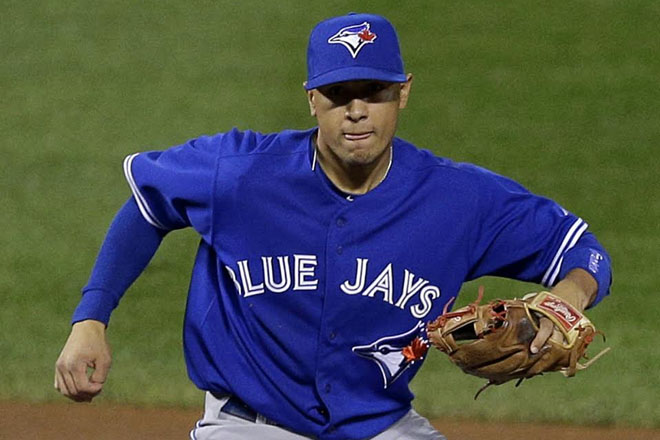 ALCS 2015: Goins Goes From Goat to Hero with Massive Performance in Game 3

Up and down the roster, the Blue Jays insisted that they did not hold their loss in Game 2 of the American League Championship Seriesagainst second baseman Ryan Goins.

There had been controversy because Jose Bautista, the star right fielder, had offered frank comments about what happened on the pop fly by Ben Zobrist that had dropped between him and Goins, but Bautista was insistent that in saying Goins had called for the catch, he was only giving an honest account. Bautista, a team leader, was accused of taking a player in his first full major league season and throwing him under the bus, hanging him out to dry, or whatever other phrase you wanted to turn.

That was not how the rest of the Blue Jays interpreted things.

“He’s been outstanding all year,” center fielder Kevin Pillar said. “I think we’re making a big deal about what happened the other day, but that’s not the reason we lost the game. There’s no blame on him. As much as people outside this room want to blame him for our loss, we had our opportunities. We could have scored more runs. We could have gotten out of that inning.”

That is the correct way to look at the way Saturday unfolded. The Blue Jays were 3 for 16 with runners in scoring position in Game 2, and even after Pillar’s miscue gave Zobrist a hit, it was not the 27-year-old second baseman who gave up hits to four of the next six batters to allow the Royals to turn a three-run deficit into a lead. That was David Price, the Cy Young Award candidate who completely unraveled.

Facts, unfortunately, often have no room in discussions about pivotal moments in sports. Just ask Steve Bartman, if you can find him, because somehow he was held responsible for all eight runs that the Marlins scored in the eighth inning of Game 6 of the 2003 NLCS at Wrigley Field, not to mention that the Cubs blew a 5-3 lead the next night in Game 7.

So, even if the Blue Jays had his back — and they did — it was fair to wonder what effect the episode might have on Goins. He provided an emphatic answer Monday night with a two-run single that put the Blue Jays ahead to stay, a solo homer and a sparkling defensive play to lead Toronto back into the series with an 11-8 victory that was nowhere near as close as the final score indicated after the Royals’ four-run ninth inning made things look borderline respectable.

“To come back today and perform well, it’s a great feeling,” Goins said. “Any time you travel, you just pack your bags and get on the plane, and I had some time to myself to unwind, and the guys came up to me on the plane and said, ‘Don’t worry about it’ and ‘You’re good.’ After that, you kind of flush it, come back (Sunday) and have a workout, then come back today with a clear head. Honestly, that was probably the last thing in my head today, was what happened on (Saturday). I had fun playing today, we got a win, and hopefully we get one tomorrow.”

Goins made it sound simple. Really, he dealt not only with public scrutiny that he had to know was out there, but also two pressure situations in the game. In the second inning, he faced Johnny Cueto with the Blue Jays down 2-0 and runners on first and third. An out would continue Toronto’s struggles to cash in runners, and at 0-2, Cueto had the advantage. Goins worked the count full, during which time Pillar stole second. Then Goins smashed a line drive past the outstretched glove of shortstop Alcides Escobar, plating both runs to give Toronto the lead when Pillar made an excellent slide at the plate to beat the throw home from Alex Gordon.

In the fifth inning, with Kansas City just having scored two runs to turn what had been a 9-2 laugher into a five-run game that was within reach, Goins stemmed the Royals’ momentum with his first homer since Sept. 1.

“What it shows me, how he came out and played today, was huge for our team and for him,” said Josh Donaldson, who hit a two-run homer of his own in Toronto’s six-run third inning. “Baseball’s all about not allowing your confidence to get hurt too much, and that play (on Saturday) is a play that can hurt your confidence. For him to be able to bounce back today, it showed a lot.”