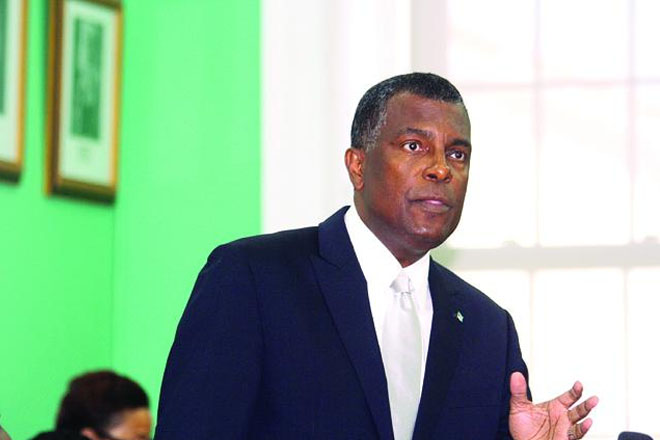 Amid criticism, Bahamas minister breaks into song in parliament

Nassau, Bahamas — Bahamas member of parliament Fred Mitchell broke into the popular Bob Marley hit “Redemption Song” in the House of Assembly on Wednesday as he defended himself against criticism from the opposition over his warning to Baha Mar megaresort CEO Sarkis Izmirlian.

As he recited the lyrics to the song, which speaks to emancipating “yourself from mental slavery”, other government members chimed in.

Mitchell recommended that the opposition members who hit out at him read the book “Uncle Tom’s Cabin” which speaks to the fight for freedom.

Mitchell was referring to Free National Movement (FNM) deputy leader Peter Turnquest, who branded his warning to Izmirlian as “inappropriate, unbecoming, and out of order” and shadow minister of foreign affairs Hubert Chipman, who said Mitchell’s comments were “belligerent and unbecoming of a minister”.

But Mitchell said his warning to Izmirlian was in defence of the country.

It was Mitchell’s Emancipation Day address that attracted the condemnation of opposition members.

During his speech, Mitchell warned Izmirlian that if he does not conform to the mores of The Bahamas, he should consider finding another country to live in.

“The late Clarence Bain used to say we must not be weak-kneed, apologetic negroes,” Mitchell said.

“This cannot stand. It is at the very least important for the invitation to be extended to that individual to consider making the appropriate steps to live elsewhere, if he does not wish to conform to the mores of the conduct of those who are economic guests in our country. He can consider that fact.”

“They’re using these buzz words,” he said. “The particular one that I take issue with is ‘belligerent’. This is the same kind of language that is used in the old slave narratives when the salves rise up and say something that they disagree with and the slaves are described as being belligerent.”

Pointing to his speech, Mitchell said he doesn’t believe the FNM read what he described to be a rational and very carefully reasoned statement.

He stood by his comments on the matter.

He said he supports everything that Mitchell said, adding that there is nothing wrong with the warning that the minister issued.

The government and Baha Mar have continuously locked horns since the company filed for Chapter 11 bankruptcy in the United States on June 29.

The government filed a winding up petition, seeking to bring Baha Mar into the control of Bahamian courts, but that matter was adjourned to August 19 to allow negotiations to play out.