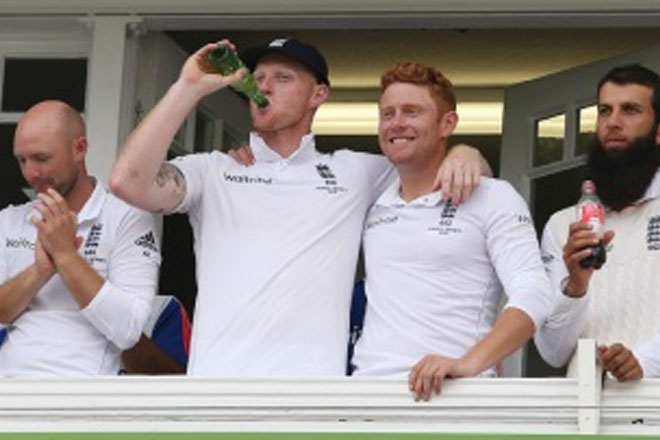 Sports Page — Australia’s cricketers have responded angrily to suggestions that the presence of their partners and children on tour contributed to the team’s loss of the Ashes.

Members of the team have been incensed by stories written back home that depict their families as unnecessary distractions during the contest against England, and rejected outright the contention that they somehow brought on the team’s poor batting displays in the Edgbaston and Trent Bridge Tests that effectively surrendered the Ashes to Alastair Cook’s team.

The retiring captain Michael Clarke described allegations published in News Limited Group newspapers as “a load of shit” in a radio interview, while Mitchell Johnson singled out the Daily Telegraph columnist Rebecca Wilson in a series of tweets after reading a piece that claimed, among other things, that partners “all travel with them the entire time they are away”.

“I’ve never had a conversation with this Rebecca Wilson so to be called ‘arrogant’ is arrogant on her behalf and disrespectful!” Johnson said. “Also saying we spend every second of the day with our family is incorrect and none of her business anyway but if she wants to know, ask my wife and little girl that question. You are well off the mark Rebecca Wilson. Stick to writing about the game thanks!”

The theme of questioning the players’ partners was begun by the former vice-captain Ian Healy before the Trent Bridge Test was over. Healy wondered whether it was right for the team to have the partners on the tour before the Ashes series was decided.

Players and staff have been prepared to face criticism for cricket reasons, and have in some cases openly admitted fault, whether it be Darren Lehmann conceding ground on selections, Clarke speaking about his dire batting in the series or Steven Smith talking about where he had failed to learn swiftly enough to stay ahead of England’s bowlers. However the family accusations have struck a raw nerve. David Warner, who started his relationship with his wife Candice during the 2013 Ashes tour, offered a reasoned view.

“I spoke to Ian Healy the other day about it,” he said. “I don’t think they quite understand at the moment that your partner is probably not going to come to India, Bangladesh, Sri Lanka… just purely based on because if you’ve got a young kid, probably not the right environment to take your kid there and little bugs and things can happen. Like with the South African A team at the moment.

“But my take is I love having my family on tour. I think everyone out there knows that when you go to work on a day to day basis, when you come home to your family it’s a great thing and that always keeps me smiling. The other day we had a bad day, we went in the change rooms, we all spoke about it, we got over it, came home and we have our families here and we’re all down together playing with our kids in the foyer. It’s fantastic to have them along.”