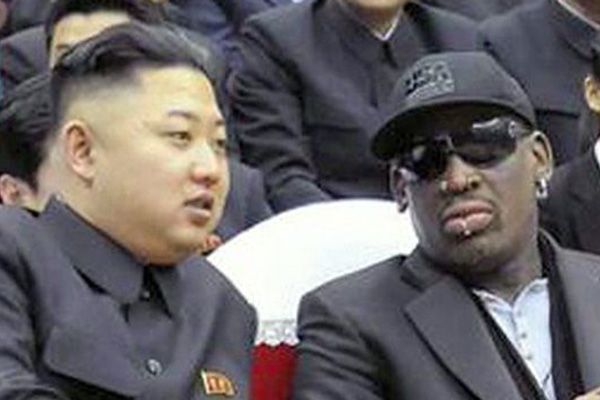 (CNN) — Basketball star Dennis Rodman on Tuesday defended his controversial visit to North Korea with a team of former NBA players, saying it was a “great idea for the world.”

In an exclusive interview with Chris Cuomo of CNN’s “New Day” from the North Korean capital, Pyongyang, Rodman reacted angrily when pressed on whether the group should have traveled there given recent events in the secretive country.

The trip takes place just weeks after North Korea shocked the world by announcing the purge and execution of Kim’s once-powerful uncle. There are also concerns for the welfare of U.S. citizen Kenneth Bae, who’s been detained there for more than a year.

The other former NBA players are due to take part in a controversial basketball game on the birthday of Kim Jong Un, the country’s young, unpredictable leader. The friendly contest with North Korea’s team is planned for Wednesday, when Kim is believed to turn 31.

Apparently referring to Kim, Rodman said, “I love my friend. This is my friend.”

Asked if he would take the opportunity to ask North Korean leaders about Bae, Rodman suggested the Korean-American had done something wrong but did not say what that was.

“I don’t give a rat’s ass what the hell you think. I’m saying to you, look at these guys here, look at them … they dared to do one thing, they came here.”