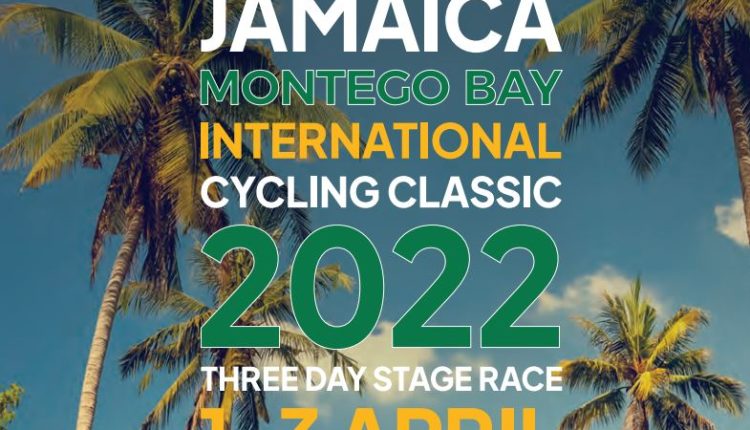 Kingston, Jamaica, February 15, 2022 — With the ambition of becoming the Tour de France of the Caribbean, the inaugural Jamaican International Cycling Classic takes place from 1st to 3rd April 2022 in Montego Bay and will attract elite cyclists from across the region and from the US.

Organised by Simmonds High-Velocity Cycling Club (SHVCC) and supported by both the Jamaican and Caribbean Cycling Federation, the cycling classic was created to develop cycling as a sport within the wider community and further promote Jamaica as a destination for cycling tourism.

With each of the three event days presenting varying distance and climb challenges, the 193-mile course sees competitors pedalling along the stunning white sand shores of Jamaica’s north coast and taking in landmark locations like Rose Hall, Duncans, and Discovery Bay.

Bringing the best Pan American cyclists to Jamaica, while simultaneously showcasing the best of Jamaica to the world, SportsMax is on board with live coverage of the approximately 150 pro and semi-professional competitors who will go all out, not just for the bragging rights of winning the first Jamaican International Cycling Classic, but also in a bid to claim a piece of the USD12,000 prize fund; with a top prize of USD2,500 up for grabs.

As well as attracting the crème de la crème of the Caribbean cycling fraternity, day three will feature separate Under 18s, Female, and Master cyclist events.

Commenting on the Cycling Classic, Club founder and former national team coach, Carlton “Coach” Simmonds says: “As a proud Jamaican, I am excited to be showcasing our beautiful country and, as an avid cyclist, I’ve got big ambitions. We want this to be a landmark event for cycling – like what Champs is to athletics. In recent years, the already high standard of our cyclists has increased significantly along with the number of people cycling. But there was a gap and opportunity to fill in the Caribbean cycling calendar to help our athletes achieve their best, and to prepare them for competitive events like the Pan American Games, British Commonwealth Games, and indeed the Olympics”.

He continues; “We have every confidence that cyclists and spectators will have a great time and, with an expectation of around 150 cyclists for our first staging – keeping in mind that in 2021 the iconic European events like the Tour de France and the Amstel Gold Race attracted 184 and 175 cyclists respectively – we’re off to a flying start.”