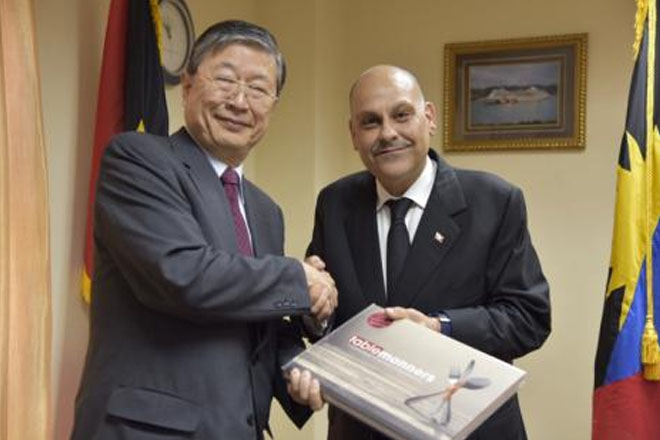 Michael welcomed Shimanouchi to his ministry and expressed his governments appreciation for the considerable assistance which the government of Japan has provided to Antigua and Barbuda over the years.

The minister particularly commended the government of Japan for its decision to remove per capita criteria as a condition for concessional financing for small island developing states like Antigua and Barbuda and urged the Japanese government to promote this approach within the major international financial institutions.

For his part, Shimanachi highlighted Japan’s ongoing program of assistance to the Caribbean in the field of energy particularly in renewable energy and energy efficiency. He indicated Japan’s interest in sharing its considerable expertise in such areas as energy efficiency and geothermal energy.

Michael welcomed this development and pointed out Antigua and Barbuda’s interest in adopting sustainable energy solutions in such areas as waste to energy, retrofitting of existing inefficient lighting and air conditioning systems, and smart metering and requested that the government of Japan consider a program of assistance to Antigua and Barbuda in this field.

The officials reviewed the recent experience of a high level CARICOM renewable energy mission to Japan which had visited a number of demonstration sites incorporating the latest trends in renewable energy and energy efficiency technologies.

In this regard it was agreed that Antigua and Barbuda would submit an integrated package of proposals to the government of Japan to assist in advancing the government’s program to achieve 20% improvements in energy efficiency as well as 20% renewable energy integration by the year 2020. This would include assessing the feasibility of a waste to energy plant in Antigua, as well as measures for ensuring the smooth integration of renewable energy into the national grid. Possibilities for assistance in wind and solar development were also discussed including opportunities for private sector investment from Japan.

The meeting also examined the potential for developing tourism linkages between Antigua and Barbuda and Japan and it was agreed that the Japanese embassy in Trinidad would liaise with tourism officials in Antigua and Barbuda concerning the possibility for participation in major tourism trade fairs and explosions in Japan.