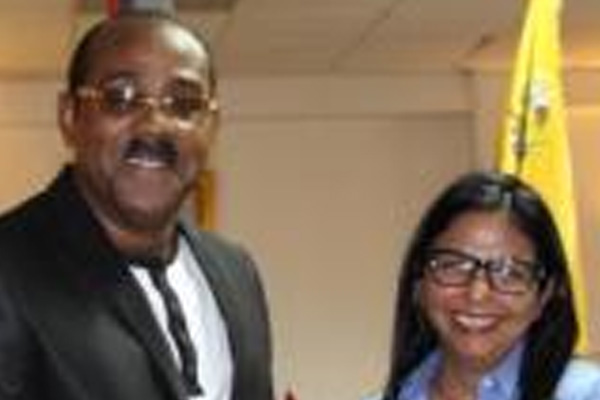 Rodriguez and her team of ambassadors and technicians flew into Antigua on Friday on the instructions of Venezuela’s President Nicolas Maduro, fulfilling a promise made to Browne in Costa Rica to collaborate on the acquisition of one of the most significant business enterprises in Antigua and Barbuda.

“We had a most successful – most productive meeting. We have in essence and in principal agreed to the terms of our arrangement which include an equity participation by Venezuela as well as a loan facility to help us to upgrade the West Indies Oil Company facility. Our plan is to turn WIOC into a major petrol distribution hub in the northern Caribbean. We have sold them the idea and they have agreed to support us. They will be providing US$24 million in funding,” Browne stated.

Browne also announced that his government has secured an additional US$30 million from a Chinese investor who will partner with Antigua and Barbuda in the acquisition.

“The excess funds will be utilized for maintenance and expansion of WIOC. We intend to turn WIOC into a major profit centre with the government maintaining 51 percent of the shares. Some of the shares will be divested to Antiguans and Barbudans eventually. I think WIOC is poised to become a major facility in the sub-region. This new enterprise has the ability to create more jobs for our people and make an even more significant contribution towards national development,” Browne said.

Rodriguez said that Venezuela is committed to Antigua and Barbuda and the Caribbean and the agreements reached demonstrate how deep the relationship is with Antigua and Barbuda. She noted that the partnership on WIOC acquisition will be beneficial to both countries.

Browne has indicated that it is his government’s intention to expand WIOC to become an export facility, which will grow the country’s foreign exchange, generate jobs and grow the economy.