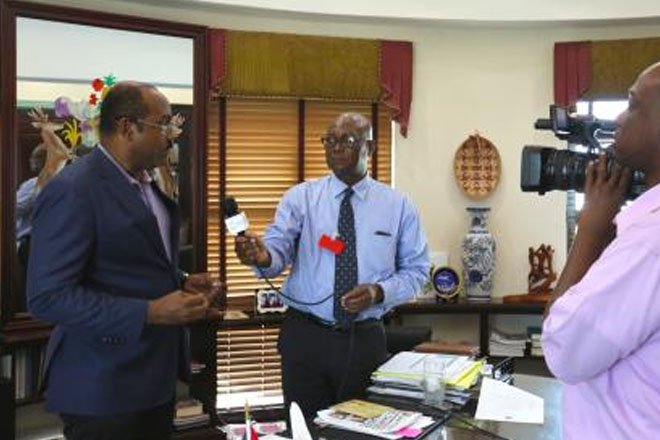 St John’s, Antigua — The Cabinet of Antigua and Barbuda, at its meeting held on Wednesday, expressed its gratitude to the commercial banks that remained open during Monday’s and Tuesday’s industrial action, staged by an opposition affiliated union.

A number of staff members of the commercial banks continued to provide services to their customers on Monday and Tuesday, allowing several banks to remain open.

On Wednesday, the third day of industrial action, several additional commercial banks opened their doors to customers as more staff members reported to work, ignoring the plea of the union to continue the industrial action.

The lead opposition union official was soundly defeated by an Antigua and Barbuda Labour Party candidate in the June 12, 2014, general election and Prime Minister Gaston Browne has insisted that the entire episode was politically motivated.

The union is wrongly insisting that the inclusion of the words “severance payments”, before wages and salaries in the new Banking Act 2015, is to be interpreted to mean that only six months’ severance pay will be paid to bank staff, in the event of liquidation of a commercial bank in Antigua.

The government parliamentarians, in the Lower and the Upper Houses, have given an assurance that full severance will be paid to staff in the event of liquidation, and that the interpretation offered by the AWU on severance is deliberately misleading.

The international banks are not likely to choose liquidation at any time, and credit unions are not covered by the Banking Act.

Browne, having spoken with the managers of each of the eight commercial banks in Antigua on Tuesday afternoon, and also having made several calls for all bank staff to report for work on Wednesday, received news from the Bankers Association that a larger number of bankers reported for work on Wednesday.

The prime minister could also report to Cabinet that all banks are expected to return to normalcy on Thursday morning.

The Cabinet noted that the opposition-led union was focused upon negotiating “death benefits, rather than life-saving procedures” for the benefit of staff of commercial banks.

The Banking Act 2015 is a uniform law that all parliaments in the eight ECCU member countries are to adopt; the new law sets new standards to ensure that indigenous banks can be better managed than in the past. Antigua and Barbuda’s parliament defied the uniformity of the ECCU law and inserted “severance payments”. None of the other seven-member parliaments of the ECCU has so done.

The industrial action, wrongfully misleading staff into believing that full severance would not be paid to them in the event of liquidation of an indigenous bank, was a deliberate political ploy intended to weaken the strong performance of the new Antigua and Barbuda Labour Party administration, the government claimed.

All commercial banks were expected to be fully staffed on Thursday and customers were expected to receive the high level of service to which they are accustomed. The Cabinet expressed its thanks to all bankers for performing their duties to their customers, their families and to the country.