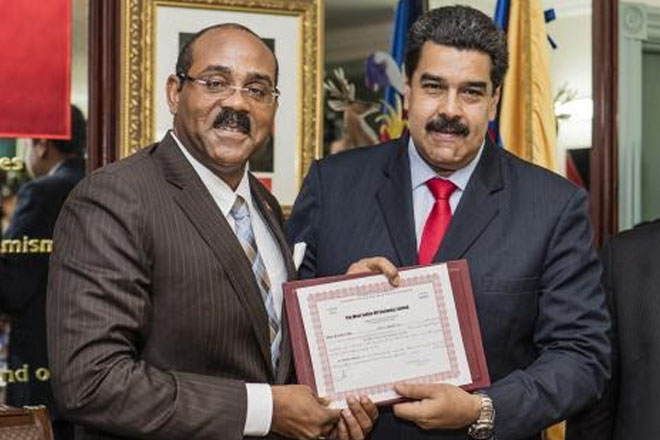 ST JOHN’S, Antigua — Prime Minister Gaston Browne has announced that the Antigua and Barbuda government has developed a new economic paradigm in moving forward in its relationship with Venezuela that will encompass taking the best aspects of capitalism to generate profits for the collective benefit of the masses.

During discussions on Saturday with Venezuela’s President Nicolas Maduro, who made an official visit to Antigua and Barbuda, Browne said that his government in collaboration with Venezuela has agreed on a number of exciting initiatives that will be to the mutual benefit of both countries and peoples, which would see profits being shared among the masses and not the wealthy few.

“Both Antigua and Barbuda and Venezuela share a common history, with our leaders having fought for the liberation, independence and upliftment of our peoples. I pledge to continue in that tradition. That is why my government has been forced to think creatively and develop a new economic paradigm for the benefit of the people of Antigua and Barbuda. The purchase of the West Indies Oil Company, which was majority owned by foreign private entity, is now 76 percent owned by the governments and people of both of our countries,” Browne noted.

He said that the new economic paradigm will ensure that the profits will be shared among the masses instead of among the wealthy few.

“This new model will be an example to the world and will stem the effects of unbridled capitalism,” Browne said.

The country’s leader said that this new model will also be the guide for Antigua and Barbuda to be utilized as an example to transform the region’s PetroCaribe debt into an investment initiative that will generate profits for the benefit of both countries.

Meanwhile, speaking from the Peoples Friendship University in Moscow, world politics scholar Antiguan Kemal Nicholason, hailed the prime minister’s initiative as an innovative development model, noting that Browne’s announcement of a new entrepreneurial socialism can only be to the benefit of the people of Antigua and Barbuda. He said that many of the region’s great leaders and thinkers have advocated the merger of capitalist ideas with socialist principles.

Browne on Saturday, following the meeting with Maduro, announced a new strategic alliance between Venezuela and Antigua and Barbuda that will include the construction of a Simon Bolivar Resort, jointly owned by both governments; Antigua and Barbuda being the catalyst of a PetroCaribe Economic Zone; the establishing of the former US base as a base of peace to create superior economic benefit for the people of Antigua and Barbuda; greater social exchanges between peoples; establishing a regional training facility and a sub-regional facility to assist with the adaptation and mitigation of the effects of climate change; and the creation of a regional bank to facilitate PetroCaribe investments in the future

“This new vision, with the support of the president of the Bolivarian Republic of Venezuela will assist in transforming Antigua and Barbuda as an economic powerhouse in the Caribbean. Failure is not an option. We pledge to bring all these projects to fruition,” Browne concluded.