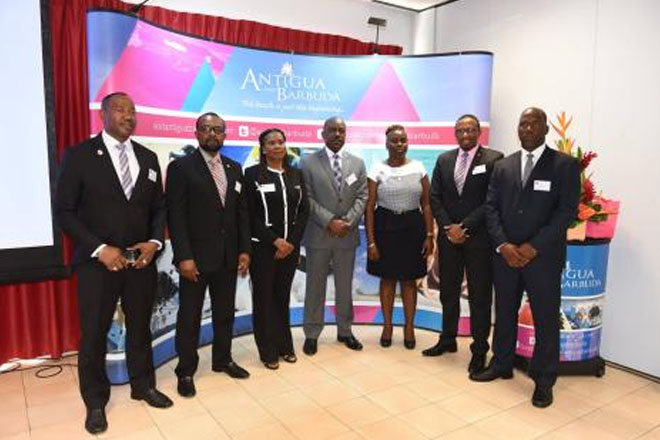 Pointe-A-Pitre, Guadeloupe — A 29-member delegation from Antigua and Barbuda, led by Chet Greene, minister of trade, commerce, industry, sport, culture, consumer affairs and national festivals, arrived in Guadeloupe on Sunday. The visit to the neighbouring French territory was the first leg of a weeklong trade and tourism mission to the French Caribbean Outermost Regions (FCOR), which will also take in the island of Martinique.

The idea was birthed in regional cooperation through implementation of a 2011 memorandum of understanding. The close proximity of the two countries will facilitate cross-border cooperation and the establishment of privileged partnerships, along with the coordination of projects and activities that would facilitate this. The mission has afforded tourism stakeholders and trade suppliers the opportunity to meet face-to-face with their counterparts in the French territories for a series of business meetings with the objective of opening doors and developing new opportunities to grow trade and tourism.

“The vision of strengthening the cooperation between the countries also follows the Administration’s mandate to reposition our private sector companies to fully realize the opportunities provided under the CARIFORUM – European Union Economic Partnership Agreement,” Greene commented.

During the first day, Greene and senior members of the delegation participated in a series of media interviews with their French counterparts to send a very positive message that the country has embarked upon a renewed focus to forge stronger actionable linkages in areas that would propel collective development.

The minister also used the opportunity to issue an open invitation to the people of Guadeloupe to visit Antigua and Barbuda for the country’sCarnival, the region’s largest summer festival.

The Antigua and Barbuda Tourism Authority in conjunction with the ministry of tourism will also be hosting a breakfast for key transportation and tourism stakeholders on the second day of the mission. Several presentations and meetings have been planned to showcase the destination, with key tour operators, and travel agents. A key objective is to commence discussions with airlines and ferry operators in an effort to provide adequate air and sealift between Antigua and Barbuda, which is a critical component in growing tourism and trade links.

The highlight of the mission so far was a destination video presentation, which included a strong call to action by Prime Minister Gaston Browne to prospective visitors and investors on the many positive attributes of the destination and the attractive trade opportunities and business prospects available in Antigua and Barbuda.