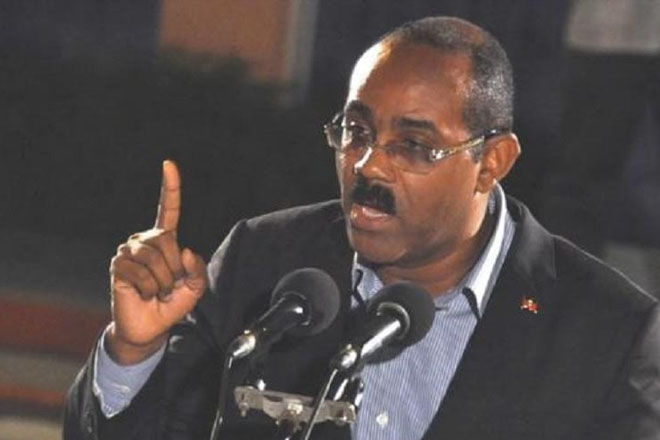 St. John’s, Antigua and Barbuda — Antigua and Barbuda has written to the European Union’s representative in the Caribbean, strongly objecting to the twin-island nation being named a tax haven and calling on the EU to apologize and withdraw the list.

In a strongly-worded letter to Head of the Delegation of the European Union to Barbados and the Eastern Caribbean Ambassador Mikael Barford, Prime Minister Gaston Browne said Antigua and Barbuda’s placement on the list was “unjust”.

“In damaging the reputation of Antigua and Barbuda – and many other Caribbean countries that appear on the extremely defective list – the EU Commission may well have infringed the terms of the Economic Partnership Agreement (EPA) between the EU and Caribbean countries,” Browne said, as he called on the EU Commission to apologize for “the damage it has done to the jurisdiction of Antigua and Barbuda” and to publicly rescind the “flawed and injurious list”.

Last week, the European Commission published a list of 30 jurisdictions, including Antigua and Barbuda and 13 other Caribbean countries, considered the world’s worst tax havens because they were not doing enough to crackdown on tax avoidance.

Each country was identified by at least 10 EU countries. In the case of Antigua and Barbuda, those countries were Bulgaria, Croatia, Estonia, Greece, Italy, Latvia, Lithuania, Poland, Portugal and Spain, which Browne said his country did little or no business with.

When the list was published, EU Commissioner for Economic and Financial Affairs, Taxation and Customs Pierre Moscovici said that publishing the list of “non-cooperative jurisdictions” was a decisive step in pushing the territories to adopt international standards.

But Browne said his government totally objected to Moscovici’s implication that Antigua and Barbuda was a non-cooperative jurisdiction.

He said the EU Commission and Moscovici had done considerable harm to Antigua and Barbuda and many other countries named on the list.

“In the case of Antigua and Barbuda, the jurisdiction has been found to be in compliance with the highest international standards of transparency and exchange of information as set by the Global Forum of the Organization for Economic Co-operation and Development (OECD) of which EU countries are members,” Browne wrote.

“Indeed, since the publication of the EU list, the OECD Global Forum has disassociated itself from the action of the EU and underscored the fact that it is their assessment which is the relevant assessment for the purposes of determining a country’s cooperation in tax matters.”

The prime minister added that it was also made clear that Antigua and Barbuda has been found to be fully compliant and cooperative with international standards established by the Financial Action Task Force on whose decision-making councils EU countries sit.

His letter also pointed to the fact that Antigua and Barbuda has signed Tax Information Exchange Agreements with a significant number of EU members and that no request for information by a EU member state has ever been declined.

“In the circumstances, my government regards the criteria by which Antigua and Barbuda has been named on the EU list of tax havens as fatally flawed,” Browne wrote to Barfod.

Several other Caribbean countries have also objected to their placement on the list.

However, in a statement seeking to clarify the list last week, Barfod said the list of 30 was not new. He said it was simply a compilation of EU member states’ lists as they were communicated to the European Commission in December 2014.

“The consolidated list is not an assessment by the Commission but a compilation of existing lists of EU member states which looked at how non-EU countries and territories around the world apply standards of good tax governance. These standards vary, but generally include transparency, exchange of information and fair tax competition,” the EU official said.