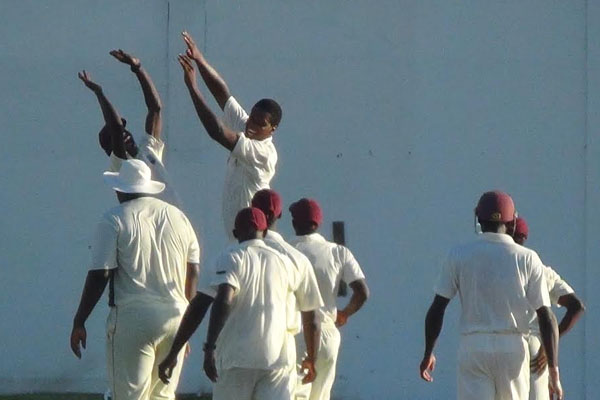 Sports Page — Antigua and Barbuda was large and in charge at the end of the first day in the Leeward Islands three day matches versus Nevis. The match commenced at the ET Willet Park on Thursday 9th October.

Nevis’ captain Tonito Willet won the toss and chose to ask the visitors to bat first.

He could well have rued that decision when the firm of Richards and Richards in Austin and Mali, got off to an enterprising opening partnership before Mali Richards was trapped leg before wicket. Austin Richards soon followed suit and soon the drooping shoulders of the Nevisian fielders were revived.

Odelmo Peters however joined a more aggressive Rakeem Cornwall in an exciting partnership, during which both profited from chances as the Nevisians lapsed in the field.

There was one over when Cornwall hit Campbell for six and then was dropped twice in the same over and then was finally out caught and bowled by the same bowler, only to discover that it was a no ball.

The moment of the day however, was a stunning catch by Tonito Willet to get Devon Thomas out for a duck.

The ball was looped nicely by Campbell, Thomas smashed it…….and I mean smashed it! Willet standing at short extra cover, with no chance to move, stuck out his hands …and the ball stuck. A truly amazing feat!

Gavin Tonge and Anthony Martin swung their bats to good effect towards the end of the innings and the Antigua Barbuda team was eventually bowled out for 338 runs.

Nevis with some 22 overs remaining only had to face about 9 overs, as the umpires called off play due to fading light.

At the end of the day, the home team was struggling on 30 runs for three wickets; with the visitors definitely cock –a-hoop.