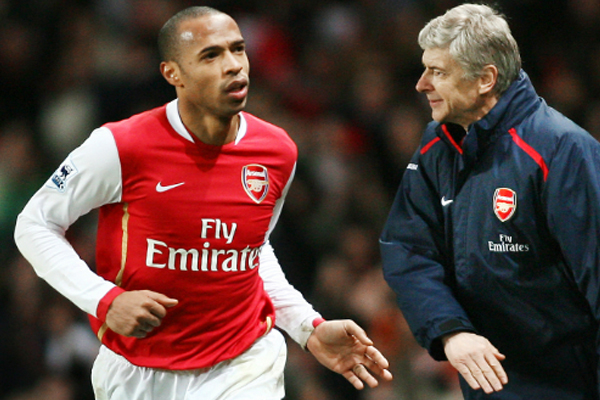 Paris, France (AFP) — Former Arsenal and French striker Thierry Henry announced Tuesday he was retiring from football after a glittering two decades long career and will become a TV analyst for Sky Sports in England.

“After 20 years in the game I have decided to retire from professional football,” Henry said in a statement on his Facebook page.

Henry, 37, a world and European champion with France, and the scorer of 228 goals with Arsenal including 175 English Premier League goals for the club, finished his playing career at New York Red Bulls just days ago.

“It is now time for a different career path and I am pleased to say that I will be returning to London and joining Sky Sports,” he said.

Arsenal manager Arsene Wenger said recently that Henry will “certainly” return to the club in some capacity in the future.

Henry, who has a daughter based in England, himself said in recent weeks that he wants to help Arsenal win the Champions League.

Henry first made his mark at French club Monaco before moving to Italian giants Juventus.

But the bulk of his career was spent at Arsenal under Wenger, who brought him to north London in 1999.

He was a crucial part of the 2003-2004 “Invincibles” team alongside fellow Frenchman Patrick Vieira, which went unbeaten as it stormed to the Premier League title.

Henry left England for Barcelona in 2007, spending three years with the Spanish giants with whom he won the Champions League trophy in 2009.

He finished his career in the United States, playing for the New York Red Bulls in the MLS, but returned to Arsenal for four matches on loan from the Red Bulls in 2012, coming on as a substitute to score the winner against Leeds in the third round of the FA Cup.

He could not however prevent the Red Bulls being eliminated in the semi-finals of the playoffs this season.

Henry will also be remembered for a blatant handball in a 2009 World Cup qualifying playoff against the Republic of Ireland which led to the decisive goal for France and a ticket to the 2010 finals.

His last international game was during the 2010 World Cup when he came on as a second-half substitute in a 2-1 loss to hosts South Africa as France were dumped out of a tournament which had been a fiasco for the 1998 World Cup winners.

Capped 123 times for France, he scored a national record 51 goals during his international career which began with a 2-1 win over South Africa in October 1997.

Tributes poured in for Henry, who scored 411 goals during his career, with French professional football league president Frederic Thiriez describing him as a “legend”.

“The English erected a statue to him but in France he did not always get the recognition he deserved,” said Thiriez of the statute dedicated to Henry at the Emirates Stadium.

“With his extraordinary track record and his record of goals for the national side, Thierry Henry nevertheless will remain a legend, he was an exceptional striker. Simply the best.”

Former England international Gary Lineker, now a broadcaster, tweeted: “Congratulations to @ThierryHentry on a truly wonderful career. One of the great footballers of our time and a top bloke. Bonne chance.”

Arsenal midfielder Aaron Ramsey also tweeted: “Congratulations on an outstanding career @ThierryHenry. Top player. Top guy. #Legend,” while England and Liverpool striker Daniel Sturridge, added: “Happy retirement to my hero and idol @ThierryHenry. Wish you all the best in the next chapter.”