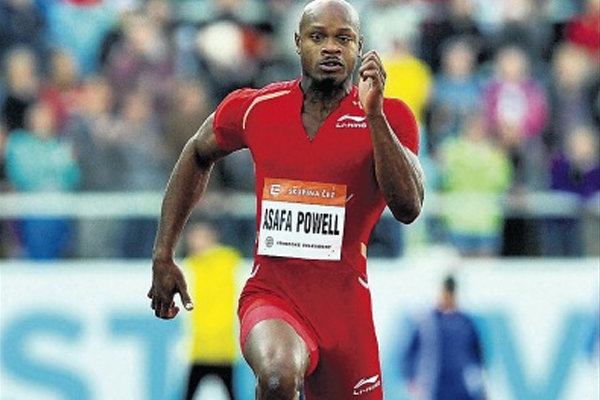 Sports Page — Former world record holder Asafa Powell clocked a slow 10.30 seconds (0.8m/s) for fourth place at a low-keyed meeting in Luzern, Switzerland, yesterday in his first race in 11 months on his return after a drug suspension.

A day after the Court of Arbitration for Sport (CAS) reduced an 18-month ban imposed by the Jamaica Anti-Doping Disciplinary Panel (JADDP) to six months, Powell looked race-rusty, but had a broad smile on his face after the race that was won by Cayman Island’s Kemar Hyman in 10.23 seconds.

Meanwhile, there were no Jamaican winners on the programme, but Julian Forte in the men’s 100m, Rasheed Dwyer in the men’s 200m, and 400m hurdler Roxroy Cato all finished second, while Schillonie Calvert was third in the women’s 100m.

Running in a two-toned blue top with no sponsor’s logo, Powell, who had pulled out of the Jamaican Championships and a Diamond League meeting in Europe, managed to stay with the field for about 70 meters, but lacked the speed and stamina to challenge the top runners late in the race.

Forte ran 10.24 seconds to win the third of three races, but was edged by Hyman, who won the second race in 10.23 seconds, while a number of other Jamaicans finished down the order.

Calvert, who qualified for the Commonwealth Games in both sprints, ran 11.32 seconds (0.7m/s) in the 100m that was won by Trinidad’s Michelle-lee Ahye in 11.09 seconds ahead of American Tianna Bartolleta in 11.20 seconds, with Simpson eighth overall with 11.57 seconds.

Dwyer clocked 20.76 seconds in the 200m that was called back after the athletes had run at least 70 meters, but no one was disqualified for a false start.

Despite a strong second half of his race, Cato, the national senior champion had to settle for second place in 49.09 seconds, just ahead of compatriot Annsert Whyte in 49.59 seconds, both beaten by South African Cornel Fredericks’ 49.03 seconds.

Veronica Campbell Brown and Anniesha McLaughlin finished near the back of the field in the women’s 200m that was won by Ahye in 22.77 seconds before pulling up as she crossed the line, beating Anthonique Strachan of The Bahamas in 22.99 seconds.

Campbell Brown was sixth in 23.13 seconds and McLaughlin seventh in 23.15 seconds.