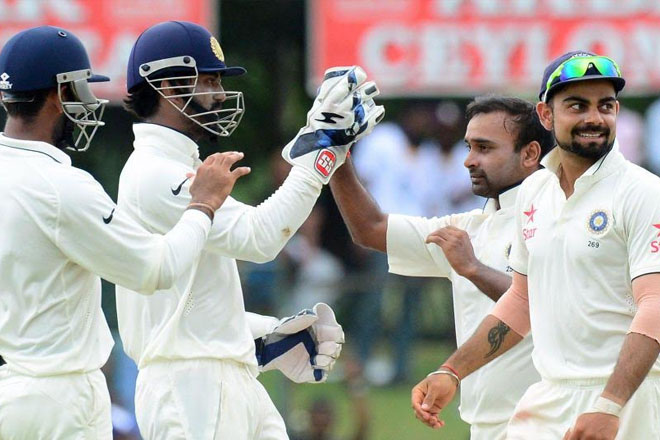 Sports Page — It had been more than a year since India last won a Test match, at Lord’s in 2014, but the final lap of their long wait zipped past quicker than anyone would have expected. Seven balls after lunch on the fifth day, Dushmantha Chameera padded up to an Amit Mishra googly. Mishra spun around in appeal; Rod Tucker’s finger went up immediately.

If there were any furrows on Virat Kohli’s brow while he chased his first win as India’s Test captain, they weren’t caused by a Sri Lankan batsman. If they appeared at all, they did so only when rain fell with the last pair at the crease to bring the covers onto the field and hasten the lunch break by 10 minutes.

For the second time in the match, India’s attack refused to release the pressure on the batsmen. R Ashwin, who had taken the first two Sri Lankan wickets on the fourth evening, picked up his 12th five-for in Test cricket, but the other three specialist bowlers contributed significantly as well.