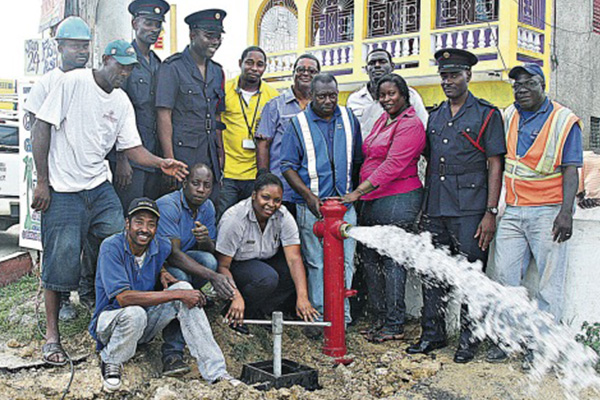 At last!… a fire hydrant for Green Island

Green Island, Hanover — For more than 10 years, Green Island, a rapidly developing town that sits mid-way between Lucea and the resort town of Negril, has been without a functioning fire hydrant.

Its absence has caused many sleepless nights for area residents, and has been of great concern to firefighters assigned to the Hanover Fire Department.

Just over two years ago, for example, a building in the community that housed a large liquor store, operated by Lancelot Reid, was completely destroyed by fire.

At the time of the blaze, the Fire Department pointed out that it was severely hampered in its efforts to extinguish the fire, due to the non-existence of a working hydrant in the area.

But last Friday, thanks to the collaborative effort of the Hanover Fire Department, the National Water Commission (NWC) and the Hanover Parish Council, a much needed hydrant was installed in the town — much to the delight of area residents and firefighters.

“The hydrant will assist in supplying water to their (fire brigade) operation when we have any fire,” said an elated Reid, adding that there are a lot of old structures in the town.

Assistant Superintendent at the Hanover Fire Department, Rudolph Seaton, who is also acting as divisional head for the parish, told the Jamaica Observer West on Friday that the installation of the hydrant is a “great achievement, as in the past challenges were experienced.”

“When there is any emergency or any fire in the township, or its surroundings, the fire unit would have to travel all the way to Orange Bay to replenish, or sometimes as far as Cove. So, today we look at it as a great achievement, and we want to thank the Hanover Parish Council and the NWC for coming on board and working with us, in making this venture a possibility,” he argued.

According to the Fire Department, they have in their possession two hydrants, but are unable to install them due to a lack of funds to purchase the parts needed to do so.

Almost two years ago, the Hanover Parish Council committed itself to assist the Hanover Fire Department financially, with the installation of the two fire hydrants in the parish.

The other hydrant, the Observer West was told, is to be installed in Hanover’s capital, Lucea — a section of which is presently without a hydrant — later this year.

Mayor of Lucea Shernet Haughton who was on hand to witness the commissioning of the hydrant, said she had witnessed over the years, several places being completely destroyed by fire, as a result of the absence of a functioning fire hydrant.

“I have seen so many places destroyed, for example, Lance Reid’s place in the town of Green Island, and also many houses. If a hydrant was nearby, then many more places could have been saved,” the mayor explained.