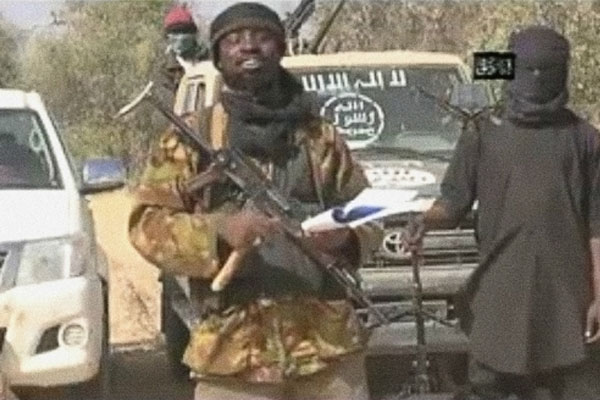 Cameroon, Nigeria (AFP) — The head of Boko Haram – the enigmatic Abubakar Shekau – has openly taunted the countries being menaced by the armed Islamist group as they call for a united effort to crush it.

In a video claiming responsibility for the bloody attack on the Nigerian town of Baga in early January, Shekau poured contempt on the presidents of Chad, Cameroon and Niger, goading Chad’s Idriss Deby Itno with the message: “African kings… I challenge you to attack me now. I am ready.”

The Baga attack on January 3 in which hundreds are feared to have been killed has been called a crime against humanity by Washington and Paris.

In the video that has just emerged on YouTube, Shekau also accused Cameroon President Paul Biya of being too afraid to ask for help in the face of group’s ever-increasing belligerence.

Cameroon has also seen repeated recent attacks, including the kidnapping of dozens of people, mostly women and children, during a deadly attack on Sunday.

Shekau’s provocative video, came as a regional summit opened in Nigeria on Tuesday aimed at stopping Boko Haram whose insurgency has left 13,000 dead and forced 1.5 million from their homes since 2009.

Leaders from Ghana and Chad have called for a unified effort in confronting the Islamist militants.

Chad sent a convoy of troops and 400 military vehicles on Saturday into neighbouring Cameroon to fight Boko Haram, as Nigeria’s neighbours appeared to be losing patience with the Nigerian army’s passivity.