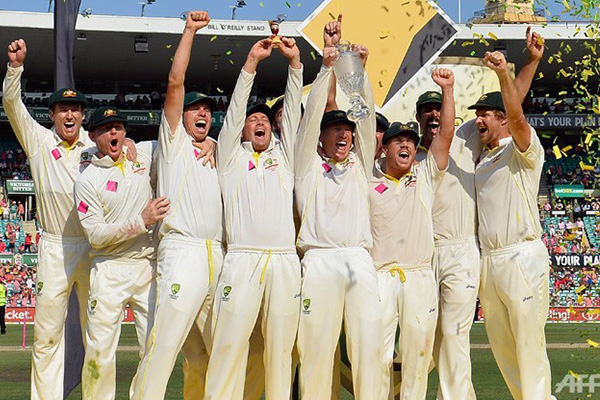 Michael Clarke was asked at the toss if he knew which two captains had led Australia to 5-0 Ashes clean sweeps. Yes, Warwick Armstrong and Ricky Ponting, he replied. Now there are three. Fittingly, it all ended in Clarke’s hands. England’s No.11, Boyd Rankin, edged Ryan Harris to second slip, where Clarke thrust his arms and clung on to a catch above his head. With it, he sealed a 281-run victory, a 5-0 result and his legacy as leader. His team not only beat England, they annihilated them.

The celebrations were intense and immediate; Nathan Lyon led the team in their victory song, Underneath the Southern Cross, on the pitch barely minutes after the win was complete. The same 11 who started on the first morning at the Gabba had carried Australia right through the campaign. Remarkably, they completed their sweep in only 21 days of cricket; it took Ponting’s legendary outfit 22 days in 2006-07 and Armstrong’s squad 24 days back in 1920-21.

For Alastair Cook, the series result was devastating. That it ended with a three-day defeat after he won the toss and sent Australia in must have been especially galling. But that England collapsed for 166 in their final innings of the series was not exactly surprising. Their batting failed throughout the tour and again they were unable to handle Man of the Series Mitchell Johnson, Ryan Harris and Co. Seven wickets in 52 minutes after the tea break and it was all over.

Set 448 for victory after Chris Rogers completed his third Test century in the morning, England needed a world-record effort to avoid defeat. It was not the kind of history they were capable of making