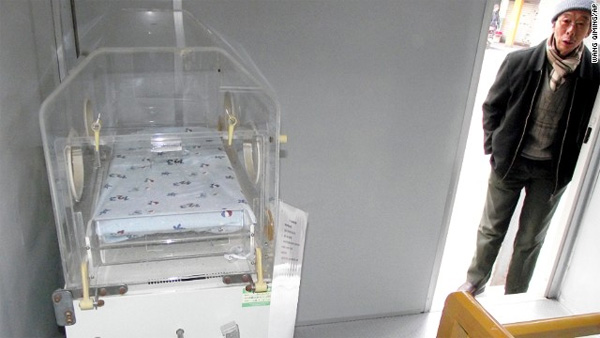 (CNN) — One of China’s controversial “baby hatches” has been forced to shut down, at least temporarily. The facility in the southern city of Guangzhou opened in January but has been overwhelmed with abandoned infants, forcing a suspension of services.

The first of the facilities opened in 2011 and increased to around 25 hatches countrywide. More of the special rooms, which are equipped with a cradle, incubator and delayed alarm to allow mothers to drop off unwanted babies anonymously, are planned. While abandoning infants in China is illegal, the practice is relatively widespread, especially in poorer areas.

The Guangzhou “baby safety island,” as they are known in Chinese, has received 262 babies since it began operation in late January, according to Chinese state-run news agency Xinhua.

All 262 babies suffer from disabilities or diseases such as cerebral palsy, Down’s syndrome and congenital heart disease according toXinhua. The scheme’s proponents argue that the hatches are key to saving the lives of children who would likely die if abandoned on the street.

Since its opening, the facility received an average of around five babies a day. The staggering number of infants who have been abandoned in the city has meant that the hatch’s operator has not been able to keep up with the volume. The city’s Welfare Center for Children has had to add spaces to take their facilities to 1,100 beds, but these are already full.

Xu Jiu the center’s director told Xinhua that the Guangzhou baby hatch had received a disproportionate number of infants.

“The number of babies we have received is much higher than in other parts of the country over the same period,” he said.

He added that it could be parents who are unable to cope with the heavy economic burden of trying to treat incurable diseases.

“Parents bring their ill babies to big cities in the hope of having them cured. But many just end up abandoning them,” he said

He was not able to predict a date when normal service would resume, but rather said that the center would focus on the children already in their care.

The unprecedented response to the facility’s opening is causing some to question the wisdom of the scheme. However, the government appears to be standing by the hatches.

Li Liguo, Minister of Civil Affairs, told reporters in the background of the country’s annual meeting of parliament this month that they “do more good than harm.”