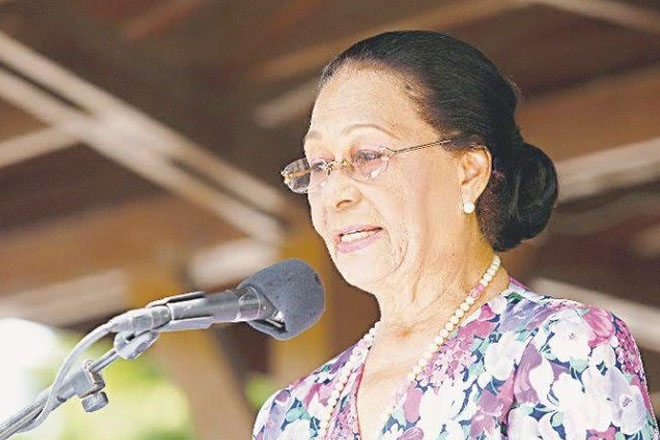 Governor General of The Bahamas, Her Excellency Dame Marguerite Pindling used her annual visit to health institutions to speak out against the country’s spiralling crime problem.

According to Tribune 242, Pindling said “somebody has fallen down on the job”.

Dame Marguerite said she felt “like weeping” for the families who have lost relatives to crime and called for the country to “do better”.

So far, the country has recorded 140 murders this year. The previous murder record was held in 2011, during the previous Ingraham administration, which saw 127 killings.

“… Something has to give, especially at this time of the year,” Dame Marguerite said during her annual visit to the Princess Margaret Hospital, adding that “Some mothers are out there today weeping, and I feel like weeping for them because we could do better than this as a people. We can do better.”

On Wednesday, police reported that a 12th grade student at Doris Johnson was stabbed multiple times and killed following an argument with several other school students shortly after school was dismissed early because of exams.

The murder took place shortly after 2pm on Prince Charles Drive, less than a mile from the school’s campus.

According to Assistant Commissioner of Police [ACP] Stephen Dean, the victim was walking on Prince Charles Drive near Blanco Bleach when he got into an argument with several other juveniles.

ACP Dean said as a result, one of the boys was stabbed several times. He was taken to hospital where he died of his injuries.

Police have not released the identity of the victim, but The Tribune understands he is Adonai Wilson.

A graphic video of the incident was spread on social media on Wednesday. The short video, shot on a cell phone, shows several boys running towards the victim and attacking him. At one point in the video, one of the alleged assailants is seen wielding a large knife before plunging it into the victim while others held him as dozens of shocked students looked on.

The Ministry of Education released a statement on the matter on Wednesday, urging students to “resolve their conflicts in a more peaceful manner.”

“While our schools have adopted a zero tolerance for violence on campuses, we wish to remind our students that violence off school is also not tolerated,” the statement said.

“We extend our heartfelt condolences to the family of the victim and our thoughts and prayers are with them and the Doris Johnson school family as well. We are deeply saddened by this tragic event that occurred (Wednesday) and once again, we call on all citizens to unite to promote a spirit of peace and love this holiday season and throughout the New Year.”