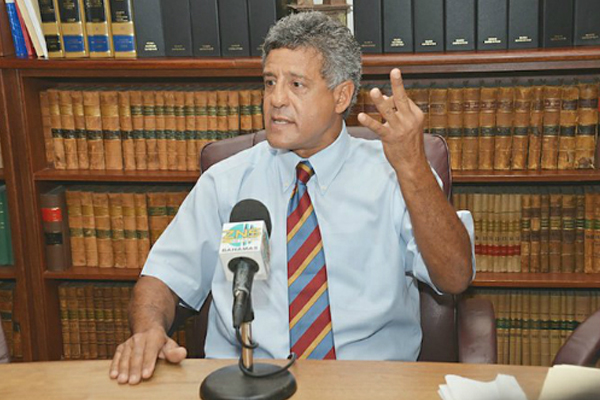 Nassau, Bahamas (CMC) — The Grand Bahama Human Rights Association (GBHRA) says it intends to challenge legally, new legislation calling on non-nationals living here to show evidence that they have permission to live or work in the country.

The Perry Christie government has come under much criticism for the new immigration policy that came into effect on November 1, and Immigration Minister Fred Mitchell has denied that the authorities were engaged in rounding up people and sending them back to their countries.

GBHRA president Fred Smith said that the government and Mitchell in particular, have been “attempting to give their inhumane, immoral and illegal immigration enforcement policy the veneer of legitimacy by forcing a bill through Parliament, where they enjoy a substantial majority.

“In the first instance, the tactics currently employed by immigration officers to terrorize the Haitian-Bahamian community constitute clear violations of the Bahamas Constitution, the supreme law of the land.”

“The government simply cannot retroactively legitimize such actions,” he said noting also that every child of Haitian parents born here had “a legal right to apply for Bahamian citizenship at the age of 18, if they have lived in this country for 10 years prior to their application.

“Removing them from this country before their 18th birthday deprives them this right and is therefore illegal.”

But Smith said that deporting those who have submitted a proper application, but have been waiting for years without word from the government is a totally unconscionable practice.

“This is to say nothing of the moral outrage of snatching young children from their classrooms, imprisoning them without charge, then sending them to a poverty-stricken country of which they have no knowledge or experience.”

He said the government and Mitchell “are fully aware, the very act of bringing legislation in an effort to legitimate a policy already in place for more than a month, is a tacit admission that the Immigration Department has thus far acted illegally.

“As such, they risk exposing the government to court action by the hundreds if not thousands of individuals who have been harmed, terrorized or otherwise adversely affected by these draconian procedures.

“The government is hereby forewarned that any Act passed by Parliament which seeks to legitimate the tactics used by the Immigration Department since November 1 will be subject to an aggressive constitutional challenge in the courts by the GBHRA,” Smith said, urging “all those who have been adversely impacted by the policy” to contact him “with a view to joining their names to a class action lawsuit, to be filed in due course”.