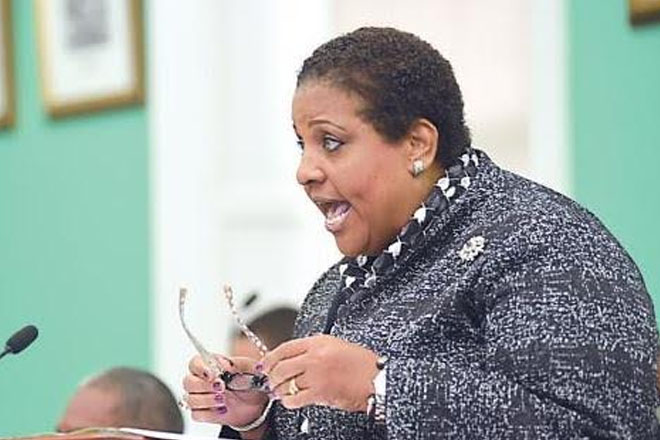 Nassau, Bahamas — The Christie administration’s Stronger Bahamas initiative is nothing more than a “massive propaganda program” being run by foreigners that is “shamelessly and disgracefully” paid for by taxpayers, Bahamas MP Loretta Butler-Turner charged on Monday.

“The Progressive Liberal Party (PLP) is shamelessly and disgracefully using taxpayer funds in a massive propaganda campaign to distract from its gross incompetence, broken promises, failures and scandals,” Butler-Turner said in a statement.

“The party that says that it believes in Bahamians is paying large sums of public money to foreigners to help run its propaganda effort.”

Minister of State for Finance Michael Halkitis revealed on Monday that the government hired FleishmanHillard, out of Ottawa, Canada, to manage the program.

“They (FleishmanHillard) have demonstrated a particular expertise and what we are doing is we have them engaged along with some local Bahamian companies producing and doing some other public relations-related work,” he said.

He said the expectation is that Bahamians will learn a great deal from the Canadians and “we (will) all emerge from it stronger”.

But Butler-Turner said Bahamians are more than capable of managing the program.

“The PLP prefers instead to neglect Bahamian talent and to pay a foreigner hundreds of thousands,” she said.

“Their stated belief in Bahamians was always propaganda.

“So it is no surprise that they are using non-Bahamians to spin even more propaganda.”

Stronger Bahamas, a multifaceted public relations initiative by the government, seeks to engage Bahamians on the work being done by the government to combat the country’s biggest challenges, the Christie administration claims.

“The Stronger Bahamas propaganda campaign is one of gross hypocrisy, a misuse of government funds, a boondoggle for foreign individuals, and part of an elaborate PLP effort to distract from its failures and to prepare for the next election,” Butler-Turner said.

“Bahamians want to know and the opposition demands to know the amount of money being paid to foreign entities and expended on this current massive propaganda effort at great cost to the Bahamian people, in whom the PLP clearly and demonstrably do not believe.”

Asked this on Monday, Halkitis said he could not say how much the firm is being paid.

He said Stronger Bahamas is not the launch of the PLP’s election campaign.

“Any government wants to be able to communicate with the people and try as best they can to help the public understand what it is they are doing and why,” Halkitis said. “This is just that.”

The former social services minister also said FleishmanHillard and the PLP already had a “pre-existing” relationship.

Halkitis said the firm has done work for the government before.

According to PR Newswire, American communications firm Allyn and Company, which was acquired by FleishmanHillard, has “handled some 200 campaigns for US senators… and the Progressive Liberal Party of The Bahamas”.

“The use of a foreign firm in such an effort in no way helps to make The Bahamas stronger,” Butler-Turner said.

“Instead, it sends money overseas that should have remained in The Bahamas, putting Bahamians first, circulating money in our local economy.

“This is yet another shameful abuse of the public purse by the PLP.

“The PLP’s latest propaganda effort uses government funds to run broadcast and print ads as well as to develop and maintain a website to push PLP propaganda.”

In the 2015/2016 budget, the government allocated $3.8 million under the Office of the Prime Minister for “advertisement and media supplements”.

Halkitis said Stronger Bahamas will benefit from this fund.

But Butler-Turner said, “With limited public funds and so many people hurting in our country, the PLP is more interested in spending money to distract from its record than in directing these funds to areas such as social services and scholarships.

“This is an uncaring and callous government.”

The government had planned to officially launch the initiative last night, but postponed the event.

The former Free National Movement (FNM) deputy leader said in the invitation and talking points sent to Cabinet ministers and MPs “is this note: ‘If you have questions on messaging please call [name of the foreign consultant]’.”

“Senior members of the government are being directed to call a foreign individual about messaging in The Bahamas,” she said.

“This is a gross insult to Cabinet ministers and to MPs as well as to the Bahamian people.”