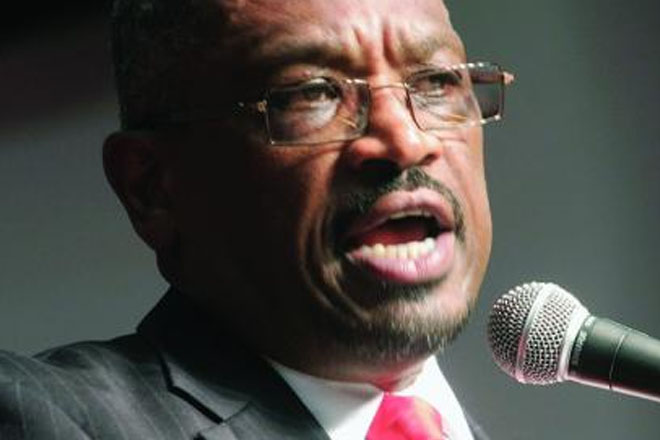 Nassau, Bahamas — The Bahamas opposition Free National Movement (FNM) leader Dr Hubert Minnis on Sunday called for Attorney General Allyson-Maynard-Gibson to step down over what he said is an “overt conflict of interest” regarding bankrupt megaresort Baha Mar.

Last week, Maynard-Gibson revealed on local radio that her two daughters, ages 30 and 28, have interests in the stalled multibillion-dollar resort on Cable Beach.

But Maynard-Gibson, who has led two government delegations to China to mediate negotiations with Baha Mar and its Chinese contractor and lender, said she is involved in no conflict of interest and that Prime Minister Perry Christie is fully aware of her children’s interests.

“She also admitted that as long as Baha Mar remains closed, her daughters would be losing money because they would have to be making the necessary bank payments.

“Therefore, I ask the Bahamian public, if a government negotiator’s daughters have stores in such a complex, and they admit that they are losing money, would you not think they would be there trying to negotiate themselves too, in their own interest?

“It is an overt conflict of interest. When Damian Gomez thought he was in conflict he did the right thing.

“He offered his letter of resignation and the prime minister had refused it.”

Gomez offered his resignation to the prime minister on April 24 after he learned that the files for a group of men he represented while he was a defence lawyer were among extradition files that could not be located.

At the time he offered his resignation, Gomez said it was the right thing to do to protect the reputation of the Office of the Attorney General.

When asked whether opposition members of Parliament have any direct or indirect interests in Baha Mar, Minnis said, “To my knowledge, I can say with confidence that no FNM MP has any interest or stores.”

He challenged Prime Minister Perry Christie and his Cabinet to state the same.

“If I was prime minister and it was one of my members of Parliament, such a thing would have never happened because I believe in overt disclosure and the Freedom of Information Act,” Minnis said.

“And if something like that would have happened they would have stepped down or be dismissed.”

He added, “It would be interesting for the prime minister to come forth to the nation and state that, ‘No member of the PLP or their immediate family has any direct or indirect interest in the Baha Mar property.’”

Minnis again questioned how the attorney general’s daughters got the leases.

He also questioned whether any other member of Maynard-Gibson’s family has any direct or indirect interest in Baha Mar.

The news of the attorney general’s daughters came shortly after MP Dr Andre Rollins said it would be an “indictment” on the Christie administration if any sitting member of Cabinet has any ownership interest in the resort, whether direct or indirect.

Baha Mar is currently involved in negotiations in China in an effort to resume construction on the stalled project.

The company said it is out of money and currently has no way to generate revenue.

Baha Mar blamed its contractor for its delays and filed for Chapter 11 bankruptcy in the US district of Delaware on June 29.

The attorney general filed a winding-up petition against Baha Mar seeking to bring it into the control of the Bahamian courts.

The winding-up petition is expected to be heard before Justice Ian Winder on August 19.