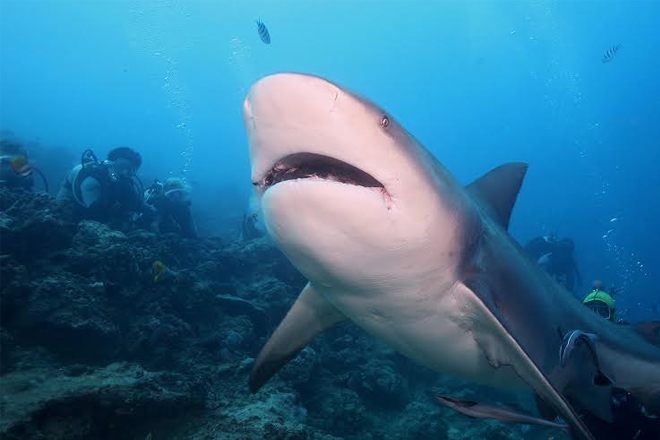 (Caribbean360) A 26-year-old Bahamian man received serious injuries when he was attacked by a shark while fishing in the Bahamas on Friday, according to the US Coast Guard.

Richard Pinder of Spanish Wells, Eleuthera, was reportedly diving for lobster when he was attacked by what is believed to have been a bull shark and bitten on his hands, stomach and thigh.

Pinder’s father, who was aboard “Water Spout,” a 76-foot (23-metre) trawler nearby, called the Coast Guard Seventh District Command Centre in Miami for help, according to Chief Petty Officer Ryan Doss.

The attack occurred more than 70 miles (113 kilometres) southwest of Andros, the largest island in the Bahamas located just west of the capital of Nassau.

According to a statement from the Coast Guard, who responded to the distress call, the injured man was airlifted to New Providence for medical attention.

While details are unavailable, the victim was reportedly in stable condition, although his injuries were said to be serious.

A number of shark attacks have been reported in recent years across the Bahamas, which is known to be home to bull and tiger sharks.

This is the third reported attack of 2015 in the Bahamas and the first involving a male victim.

In January, Lacey Webb Martin received life-threatening injuries when bitten while snorkelling, and on July 4, Katie Hester was attacked while spearfishing.