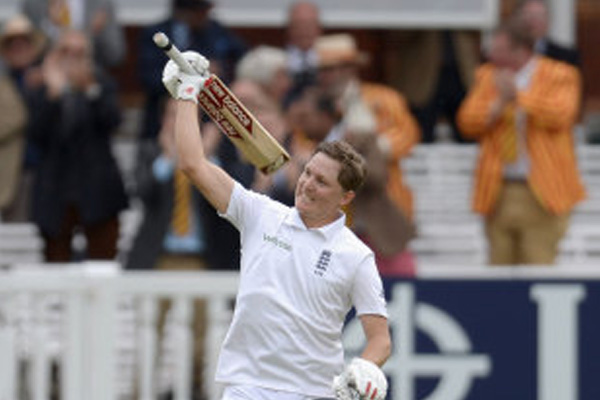 Sports Page — Such had been the mastery of bat against ball at Lord’s that few would have quibbled at the notion that Gary Ballance might complete the fourth day with a maiden Test century to his name. This Test surface has not been short of largesse for any batsman worth his salt. What would have surprised them was that he would have achieved it from a position of adversity after Sri Lanka briefly transformed the complacent mood of the first Test with a wonderful bowling performance.

The sight of Ballance reaching his hundred in the final over by hoicking Rangana Herath’s left-arm slows over the advertising boards at midwicket re-established batting supremacy. Joe Root, Kumar Sangakkara, and Angelo Mathews earlier on the fourth day – all had busied the Lord’s sign writer.

But shortly after tea, England has been precariously placed at 121 for 6, possessing a vulnerable lead of 233. It was the discrimination of his first fifty, helped in his task by an exuberant contribution from Chris Jordan, which told most of Ballance’s substance as a cricketer. Only in the last half-hour did Ballance, comfortably proportioned and increasingly ruddy of face, extend his range in a delighted dash to personal glory.