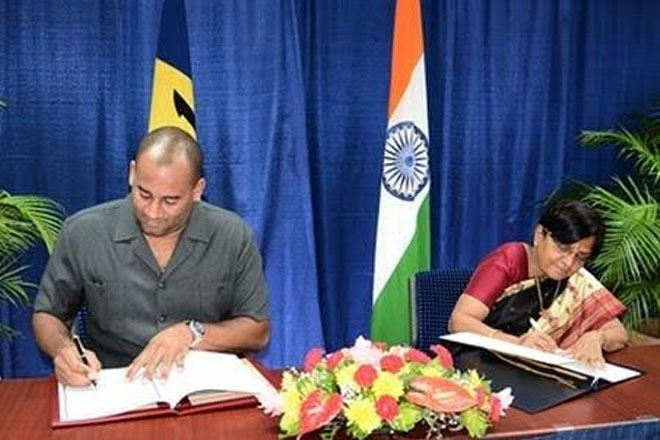 Bridgetown, Barbados (BIGIS) — Barbados and India have signed an air services agreement, which will allow for easier travel between the two countries.

According to minister of tourism and international transport, Richard Sealy, the agreement, which allows for full fifth freedom rights, would redound to the benefit of both Barbados and India.

He signed the document along with high commissioner of India, Murugesan Subashini, on Tuesday.

The minister explained that fifth freedom rights were essential for far flung destinations, as it would allow airlines designated by Barbados to transport passengers to Mumbai and Delhi in India and some points beyond.

Conversely, an airline designated by India can transport passengers to Bridgetown and points beyond. It also allows for designated airlines from either country to transport passengers from intermediate points. Sealy added that this should broaden Barbados’ tourist base and attract persons from non-traditional source markets into the country.

Subashini expressed pleasure that the agreement had been concluded; pointing out that it opened the door for more persons to travel to Barbados from India and vice versa. She added that India had a large population, and that the middle class stood at around 400 million persons, which was an excellent target market for tourists.

Subashini also highlighted the fact that India had a number of training programmes that Barbados could take advantage of, particularly now that travel between countries was easier.

In addition to the air services agreement, the two officials signed a memorandum of understanding, which allows for both countries’ designated airlines to operate seven services per week in each direction on the routes specified in the agreement.