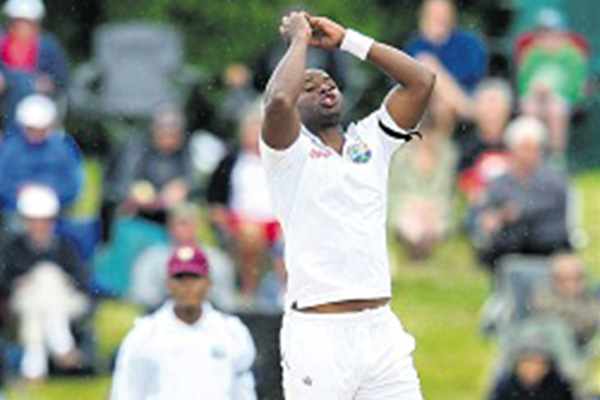 Port-of-Spain, Trinidad — Barbados, behind a stroke filed 61 from man of the match Dwayne Smith and a four wicket haul by Fidel Edwards, forced their way into the finals of the NAGICO Super50 regional cricket competition when they humbled Guyana by seven wickets in the second semi-final played at the Queen’s Park Oval here Thursday.

Guyana won the toss and batted scoring 181 all out off 48.4 overs to which Barbados replied with 182  for three in 46 overs.

Barbados’ chase was set up by Smith who rushed to 61 off 37 balls with nine fours and three sixes and an opening partnership of 81 with a patient Kraigg Brathwaite.

Brathwaite occupied the crease until Barbados reached their target to remain undefeated on 55 in 122 minutes with five fours. His mature performance was the ideal approach for his team. In the process he posted his highest score in this format of the game at this level.

He found another useful partner in Kenroy Williams who was 40 not out off 78 balls with two boundaries. The pair put on 72 unseparated for the fourth wicket, Williams making the most of his opportunity having come into the match as a replacement for Rashidi Boucher.

Veerasammy Permaul, with the wickets of Smith, trapped leg before and a marginal return catch of the Barbadian captain Kevin Stoute, finished with two wickets for 44 runs off 10 overs.

Guyana won the toss at the start of play and batted first. Skipper Christopher Barnwell might have started to regret that decision as Guyana slid to 26 for four. It took a partial revival for the fifth wicket of 65 runs between Barnwell and Narsingh Deonarine to bring a measure of respectability to the Guyanese innings.

The momentum swung again when Barnwell, in a  rush of blood, ill advisedly  hoisted Kenroy Williams to long on and was caught by Jason Holder for 37 made off 54 balls with four boundaries and one six. Narsingh Deonarine  topscored with 58 off 108 balls with seven boundaries.

Rain briefly interrupted the Guyanese innings after 46 overs and the score on 159 for seven. Anthony Bramble and Veerasammy Permaul scored a flurry of boundaries just after the resumption. Both were run out by Fidel Edwards off his own bowling.

He rushed Trevon Griffith into a pull shot only to be caught by Kevin Stoute at mid on for seven. Ramnaresh Sarwan was adjudged leg before without scoring and Assad Fudad drove at a ball wide outside the off stump and was caught by Benn at slip.

Barbados will now meet Trinidad and Tobago in the final of the competition to be played at the same venue on Saturday.