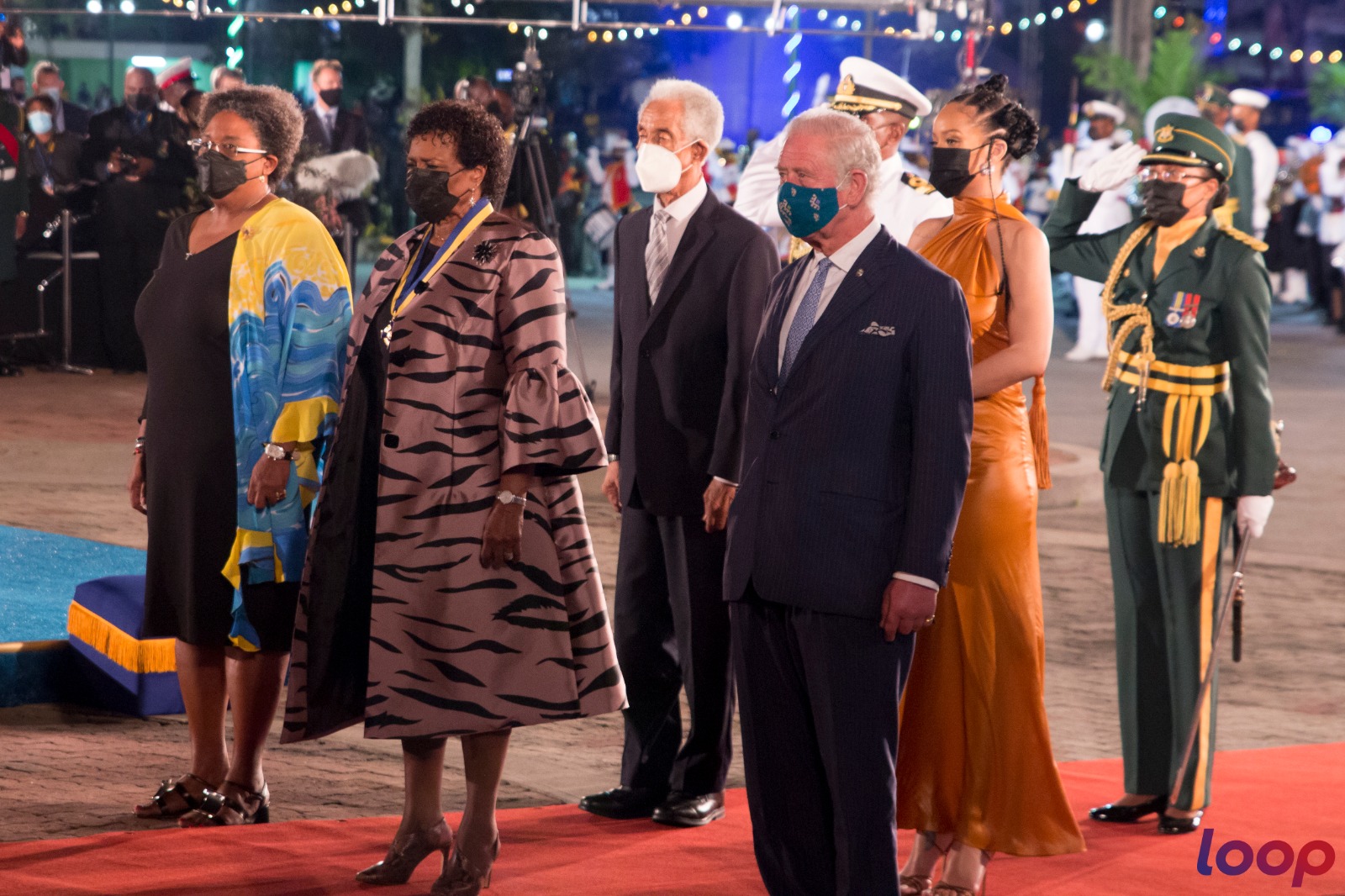 Finally, after nearly 400 years of British rule, much talk, and several administrations later, Barbados has completely cut its ties with Queen Elizabeth II and the monarchy.

As the clock struck midnight, the island transitioned from having the Queen as Head of State to a parliamentary republic with Her Excellency the Most Honourable Dame Sandra Mason – the island’s first president at the helm.

“I, Sandra Prunella Mason, do swear that I will be faithful and bear true allegiance to Barbados according to law, so help me God,” President Mason proclaimed as she was sworn-in during the historic ceremony held at Heroes Square, Bridgetown. Her son Matthew Goodin stood proudly at her right side, holding the Bible as the Dame was moved to tears taking her oath.

During her first address to Barbados as a republic, President Mason highlighted the importance of drawing of the lessons garnered throughout the island’s 55 years of Independence and pushed that as the country advances on this new path of republicanism, it should underscore the importance of nation-building.

“Since independence, our heroes and our humble citizens, our crews and passengers have built international reputations, anchored in characteristics, our national values, our stability, and our successes. Drawing on the lessons of those intervening years, possessing a clear sense of who we are and what we are capable of achieving. In the year 2021, we now turn our vessels bow towards the new republic. We do this so that we may seize the full substance of our sovereignty.

“For decades we have had discourse and debate about the transition of Barbados to a republic today, debate and discourse have become action. Today we set our compass to a new direction girded by the successes of the last 55 years, buoyed by the confidence garnered from our triumphant and accomplishments,” she remarked.

“In the republic of Barbados, we must see ourselves as thought leaders and change agents, actively engaged in the difficult business of nation building. A nation that is characterised by courtesy, harmony, unity, opportunity, equality, economic wellbeing, empowerment, and respect for each other’s differences,” President Mason added.

Held in the country’s capital, Bridgetown, there was a hive of activity despite the pandemic and protocols, with proud Barbadians on the outskirts, clad in their blue, yellow and black proudly waving their flags and cheering at the installation of President Mason.

The ceremony was attended by several dignitaries and Caribbean Prime Ministers including Trinidad and Tobago’s Dr Keith Rowley, St Lucia’s Lucia Philip J Pierre, and Philip Davis of The Bahamas. Ambassador and global superstar, Robyn Rihanna Fenty was also in attendance and later announced as the next Barbados national hero.

The guest of honour was His Royal Highness, the Prince of Wales.

Prince Charles commended Barbados for forging its own path with “extraordinary fortitude”, despite the challenges and  atrocities the country would have faced. He urged Barbadians to let “freedom, justice and self-determination” be their guides as their embarked on this new journey as a republic, which he called a point on the continuum of Barbados’ existence so far.

“As your constitutional status changes, it is important to me that I should join you to reaffirm those things which do not change. For example, that the close and trusted partnership between Barbados and the United Kingdom as vital members of the Commonwealth have a common determination to defend the values that we both cherish and to pursue the goals we share. And the myriad connections between the people of our countries through which flow admiration and affection, cooperation and opportunity, strengthening and enriching us all.”

Following the president’s installation by Chief Justice Sir Patterson Cheltenham, she was conferred the Order of Freedom of Barbados.

Prime Minister Mia Amor Mottley, Chief Justice Patterson Cheltenham,  Attorney General Dale Marshall, Chief of Staff of the Barbados Defence Force (BDF) Commodore Errington Shurland, and Commissioner of Police Richard Boyce, took the oath to of allegiance to Barbados “according to law”, instead of to the “Queen, her heirs and successors”.

As Barbados marked its 55th Independence Day today, November 30, there was a firework display just before 2:00 am over the Historic Parliament buildings to culminate the Road to Republic proceedings and signal the dawn of the newest Republic in the world right now.

Barbados’ name will remain Barbados and not The Republic of Barbados.