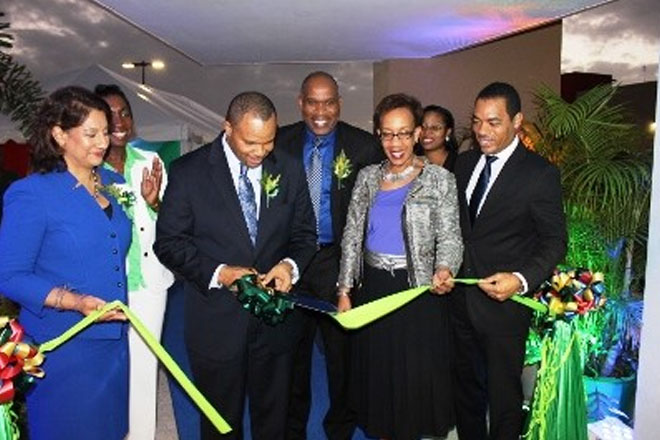 Bridgetown, Barbados (BGIS) — The Barbados economy has begun to turn around, says the island’s minister of finance, Christopher Sinckler.

He made the disclosure last evening, as he delivered the feature address at the official opening of a new banking centre.

Sinckler told his audience: “The fact that our first quarter growth was just short of one per cent and the predictions for between one and two per cent growth for the remainder of the year give us a degree of confidence that the policies we have adopted, the discipline we have shown, and the tenacity that we have will bear us out successfully in the end.”

He said there were many predictions that the instability of this country and region would continue and recovery could only be possible if citizens “had thrown our sweaty night caps … into the air, declare defeat and scamper off wimpishly to Washington DC for a bail out from some international financial institution”.

But, he insisted that those citizens who had faith in their own abilities to find home grown solutions to address those challenges in a way that did not decimate the society, worked hard to ensure the vision became a reality.

“Today, we are still in the battle, fighting and winning. I believe I can say with some degree of sincerity that our confidence in ourselves has not been misplaced. Indeed, while the mission is far from over, and the final destination is still some distance off, our strides are getting fuller, our strength more lasting and our chances for ultimate success more sure,” he declared.

Sinckler noted that at the end of March the international reserves stood at $1,135 million, representing 16 weeks of imports, up from 14 weeks at the end of 2014. He added that the government had achieved its revised fiscal target of 7.2 percent of GDP for the fiscal year 2014/2015, with a small primary surplus of BDS $37 million.

He stressed that the economic recovery was part of the steadfast discipline that was applied in putting together the 19-month programme designed to return stability to the foreign exchange market and bring the fiscal deficit down to more manageable levels. In addition, he stated that he wanted to see growth in the economy through the expansion of critical sectors.

Sinckler promised that the government would continue to make every effort to bolster growth and to facilitate institutional development via broad based growth and strategic development objectives.

“The combination of targeted strategies and our strong national characteristics, I believe, will enable Barbados … to continue to be one of the leading jurisdictions for investment, international business, financial services and just simply for living,” he remarked.

He also stressed that it was necessary for the island to have a financial services sector with institutions that continued to explore new frontiers of e-commerce opportunities and building new institutional arrangements in order to secure economic gains for citizens.