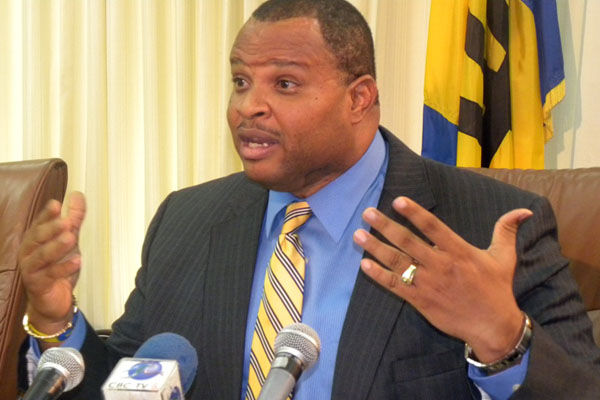 Barbados gets US$17.8 million boost for human resource programme from EU

Bridgetown, Barbados (BGIS) — Within a few days, the European Union (EU) will pay BD$35.65 million (US$17.825 million) into the Consolidated Fund as part of its continuing support of the Barbados human resource development (HRD) programme.
Minister of Finance Christopher Sinckler described the HRD programme as an important stepping stone in the reform of the Barbados economy.

He made the comments on Friday during a press conference to announce the payment of the third tranche of budget support to Barbados under the HRD programme. Those present included the head of delegation of the European Union to Barbados and the Eastern Caribbean, Ambassador Mikael Barfod.

Sinckler said: “The human resource development programme seeks to unleash that potential among Barbadians across a number of spectrums. The central focus in this case is among public sector employees, but it is not limited to them, it is in fact extended to all Barbadians.”

This will be the third payment of an overall contribution of BD$130 million to the sector, and the minister disclosed that the programme had been going exceedingly well.

“The ministries and departments have been meeting their targets. They have designed an integrated programme that seeks to address a number of issues in relation to skills building, the expansion of knowledge, the integration of different types of skills across applications within the service and beyond, and of course, to chart a new platform for emerging areas within our economy,” he explained.

He listed some of those emerging areas as green technology, alternative energy, the cultural industries and the film industry. Sinckler said Barbados’ unemployment rate was at an unacceptably high level of 12.3 percent, and blamed it on the economic challenges the island has been facing.

“We expect, as we are beginning to see now, those challenges will recede. As the Barbados economy rebounds and gets stronger going forward, as the macro stability locks in while we pursue the fiscal reforms, the macroeconomic reforms and the administrative reforms across the system … a better trained cadre of workers will be required to drive that economy,” he stressed.

Barfod noted that the island had made a significant investment in education over the past few decades.

“But, Barbados now needs to better leverage its investment in education into tangible outputs that better engage the private sector and encourage increased foreign direct investment in the country…

“In our view, an investment in human capital represents one of the most critical engines of economic recovery for Barbados. It is pivotal to better responding to the challenges of job creation, reduction in employment and retooling of the workforce. We therefore believe that our support to this sector is needed now more than ever,” he suggested.

He pointed out that, under the HRD programme, the EU was working with the government to develop a modern dynamic workforce that was responsive to the needs of the labour market, and capable of reinventing itself through the best available knowledge, research and innovative ideas.

Barfod said the EU was cognisant of government’s efforts to stabilise the economy through the home-grown growth and development strategy. He acknowledged that the economy was still at a critical juncture but was showing signs of recovery, with growth returning in 2014.

“The outlook for 2015 has also improved, with the decline in world energy prices, a robust recovery in the United States, and increased airlift from new markets such as Brazil, which are all expected to have a positive impact on the Barbados economy.

“To secure fiscal sustainability, the EU encourages the government of Barbados to continue its adjustment effort through the ongoing and planned reforms,” he stated.

Barfod listed them as including the introduction of the planned fiscal responsibility legislation; the enhancement of the oversight to strengthen statutory bodies and state-owned enterprises; and the modernisation of the national procurement system through the approval of procurement legislation.