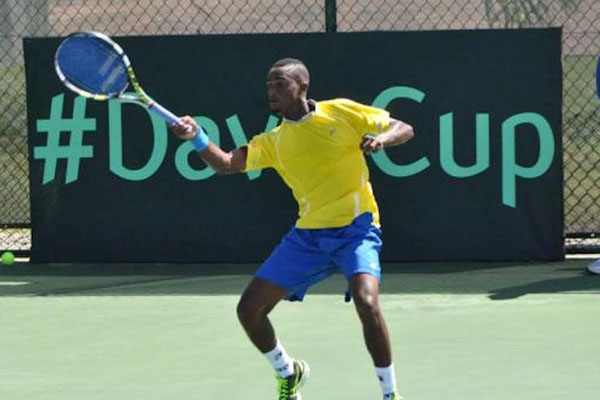 Charlottesville, Virginia (AMG) — Barbados’ Darian King is the lead news-maker of the pro tennis, minor-league Charlottesville Challenger for all the wrong reasons.

The world’s No. 310 ranked player (and Barbados’ No. 1) angrily went down 6-4-6-6 (4-2) to Britain’s Edward Corie in the second set of his first-round match in Virginia on Monday. His loss of a tiebreaker point quickly escalated into a tantrum which saw King throw his racquet into the tarpaulin behind the court, deflecting onto a nearby line umpire who appeared to collapse in pain.

As forecast by the match’s lead commentator, King was immediately defaulted, handing the victory to Corrie, who is ranked No. 217 in the world.

The dramatic ending of the game was subjected to repeated video replays and analyses by sportscasters, who tried to understand the seriousness of the umpire’s reaction to the apparent light secondary contact on the umpire’s back.

“I’m.. I’m not sure exactly what happened”, said the lead commentator after the umpire clutched her chest and back, before apparently receiving treatment on her right knee. King himself appeared visibly confused, and went on to plead that he did not hit the umpire even while she remained on the floor receiving treatment.

The umpire was later cleared of serious injury.

In a post to his Facebook page on Tuesday, King went on to apologies to the Association of Tennis Professionals and officials, saying:

I would like to apologize to the ATP, the tournament director of the Charlotte’s ATP Challenger event and the lines lady. I am sorry for my actions yesterday during my match against Edward Corrie of Great Britain.

I must first say my actions were no[t] intended to hurt anyone. I understand the rules of the game and I accept the penalty that I have been given and I will move forward. Thanks for all the supportive calls and messages in regards to the incident and my career. My apologies once again and I will look to finish the year as strong as possible.

Despite being an obvious accident, the incident marks a career-low for King, who now finds himself in the cross-hairs of unforgiving media coverage.