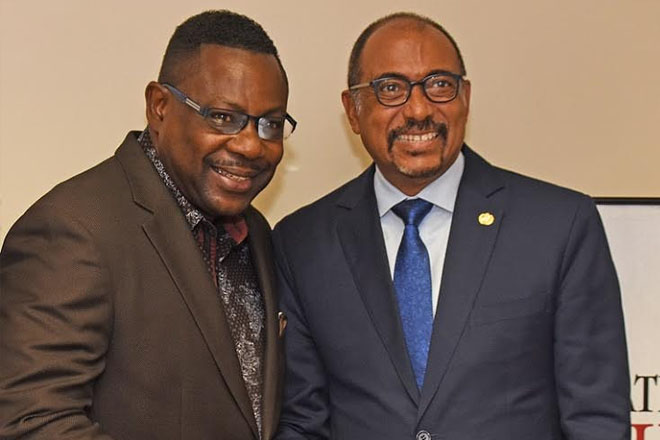 (Caribbean360) Barbados is on track to end the AIDS epidemic as a public health threat by 2030, according to UNAIDS Executive Director Michel Sidibé.

The Caribbean country has already reached the testing pillar of the 90–90–90 target, with 92 per cent of people living with HIV being aware of their status. The Ministry of Health has reported that for six years in the past decade no babies have been born with HIV, paving the way for the country to work towards being validated by the World Health Organization as having eliminated mother-to-child transmission of HIV.

During a visit to Barbados earlier this month, Sidibé congratulated the country on the progress made in the national AIDS response.

Barbados Minister of Social Care, Constituency Empowerment and Community Development Steve Blackett reaffirmed the country’s commitment to fast-tracking the AIDS and noted that in the new phase, the country Barbados is addressing the social determinants that support HIV transmission, including intergenerational poverty and transactional sex.

Barbados has established a unique database of research and resources relating to HIV in the Caribbean. It is also using data to refine its approaches to prevention. With support from the Government of the United States of America, the country is constructing a new, amalgamated laboratory, improving the facilities that currently serve the entire eastern Caribbean.

Efforts to develop policies and legislation that protect people living with HIV and people who experience discrimination on the basis of sexual orientation are also ongoing.

Permanent Secretary in the Ministry of Health Tennyson Springer said the aim is to assist HIV/AIDS sufferers in a wholistic way.

“There are so many commonalities relating to HIV and noncommunicable diseases. The Ministries of Health and Social Care are collaborating to ensure that we address the total person. We are looking to expand that programme.”

The Ministry of Health is committed to addressing stigma and discrimination by decentralizing services and partnering with civil society to reach marginalized communities, but funding is a challenge, as Barbados is ineligible for most donor investments owing to its middle-income status.

Sidibé said that UNAIDS is advocating for increased focus on investments in fragile communities in order to ensure that middle-income countries are not left behind.

“We need to band together to demonstrate that the concept of low- and high-income countries is obsolete. How do we finance vulnerabilities? We need to focus on more fragile communities, not fragile countries,” he said.

While in Barbados, Sidibé also met with people living with HIV, representatives of civil society and the United Nations Country Team.