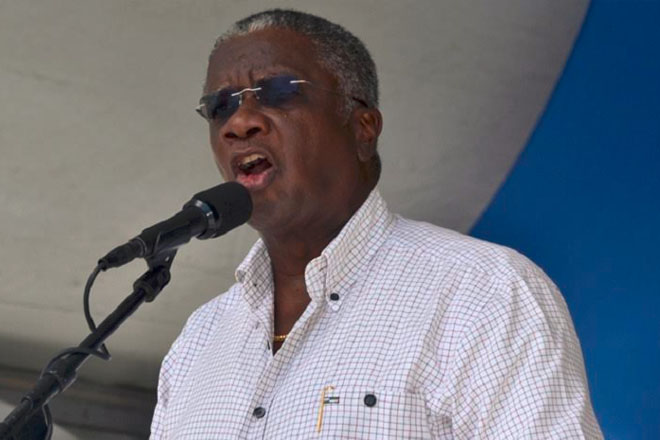 Bridgetown, Barbados — Prime Minister Freundel Stuart has accused the trade union movement of using bullying and blackmail tactics as the National Union of Public Workers (NUPW) and the Barbados Workers’ Union (BWU) prepare to stage an island-wide strike either tomorrow or Thursday.

But even before that national shutdown, travel and trade in and out of the island is expected to be affected from today, with unionized workers at the Immigration Department joining those in the Customs Department on a go-slow.

That is in addition to Sanitation Service Authority (SSA) employees being off the job since last week.

The industrial action, which began last Monday with a protest march through the capital, was sparked by the Barbados Investment and Development Corporation (BIDC) forcibly retiring 10 employees who had reached the age of 60. The BIDC said it had invoked its right under the Statutory Boards (Pensions) Act to retire officers reaching that age but the NUPW has insisted the move was illegal and is demanding the reinstatement of the workers or that they be paid until the age of 67.

After a meeting with hundreds of members yesterday, NUPW acting general secretary Roslyn Smith said the union was awaiting final word from the BWU, which has joined in solidarity to protest the “disrespect” which the unions say the labour movement has been dealt, to decide on the exact date.

“Phase three of the action is expected to take place shortly. We are awaiting word from our sister union . . . whether it’ll be Wednesday or Thursday for the total shutdown,” she said.

“We will not stand for this ongoing slide of disrespect for us,” Smith added as she announced the intensified action and sought to clarify that both the SSA and Customs & Excise Department workers had their own grievances as well.

BWU general secretary Toni Moore later confirmed her union’s involvement in the pending shutdown but said a decision has to be taken on which category of employees would be called out. The BWU, which joined in last week’s protest march, is the country’s largest trade union and represents mostly private sector workers.

“Some suggestions have been entertained and we now have to detail what has been proposed to determine how our action, which will come this week, will have its highest impact,” Moore said at the end of a meeting with hundreds of BWU members yesterday.

But Prime Minister Stuart, speaking for the first time since the industrial action began, harshly criticized what he said was a new era of “choke and rob industrial relations”.

“I have listened very carefully to all of the utterances and I have noted a few things. One, I have noted now that process has been banished to the limbo of forgotten things; you do not have to go through processes anymore. I have noted that the word negotiation has been emptied of all of its significance, so you don’t have to negotiate anymore. What you do is to use bluster, to use bullying and to use blackmail,” he told reporters on the side-lines of the two-day Barbados National Consultation on Housing and Sustainable Urban Development yesterday.

In a clear reference to the fact that a younger crop of trade unionists are now at the helm of the unions – NUPW president Akanni McDowell and his executive, and BWU boss Moore – Stuart said that while Barbados had previously relied on “the maturity, the conscientiousness, the civic mindedness and good will” of trade union leaders to manage the process, “all of a sudden now, like the rushing mighty wind on the day of Pentecost, we have some new actors on the scene who are basically telling us that all of that was nonsense . . .”

“. . . That what you do is to shut the country down at the first opportunity; that the aim of industrial relations is to teach the Government a lesson. And, of course, all Barbadians have seen the extremes to which this new element is prepared to go. They have made it very clear this is new trade unionism.”

“The trade union movement has to be protected from adventurers. It has to be allowed to do its work . . . Section 48 of the Constitution of Barbados makes very clear that Parliament could make laws for the peace, the order and the good Government of Barbados. There is good reason why that section is there,” he said.

Although not making reference to any specific individual or group, Stuart said that “a fanatic armed with a gun is a very dangerous man . . . but as the Prime Minister of Barbados I have a duty to make sure that fanatics armed with guns don’t get too far with them”.

Meantime, after being unable to find a solution to avoid the impasse during talks with the top brass of the BIDC, Minister of Industry, International Business, Commerce and Small Business Development Donville Inniss said the statutory body would be proceeding with court action and would abide by whatever decision is taken. And he urged the NUPW to do the same.