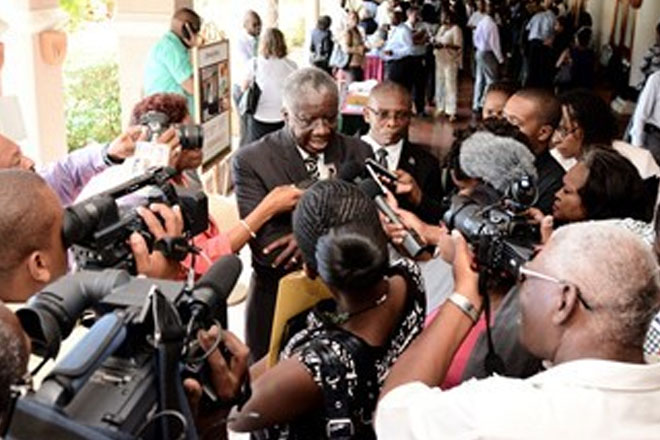 Stuart was speaking to the media on Monday about the “involuntary retirement dispute” involving the Barbados Industrial Development Corporation and the National Union of Public Workers, on the sidelines of the two-day Barbados National Consultation on Housing and Sustainable Urban Development.

The prime minister said: “In fact, we have been told that this is new trade unionism. The implication sometimes given that the people who were there before did not know what they were doing and that this new trade unionism is supposed to come to teach all of us, including those who have demitted office recently in the National Union of Public Workers and elsewhere, how trade unionism should really be practiced.

“I have listened very carefully to all of the utterances and I have noted a few things. One, I have noted now that process has been banished to the limbo of forgotten things, you do not have to go through processes anymore. I have noted that the word ‘negotiation’ has been emptied of all of its significance, so you don’t have to negotiate anymore. What you do is to use bluster, to use bullying and to use blackmail.”

Stuart expressed the view that the union was not starting at a micro level to deal with these issues and graduate its resistance upward to various levels.

“What you do is to start by saying, ‘you going to shut the country down’, so that innocent people who have done the world nothing have to endure not having their garbage collected; have to wonder whether they will be able to get a bus when they want it; have to wonder whether what they regarded as the certainties in their lives will continue to be certainties,” he stated.

He maintained that there must be a response to “choke and rob industrial relations” and stressed that, as prime minister, he had a duty to ensure that institutions, including the trade unions, were protected.

He added that he must make sure that the public’s comfort was not unnecessarily disturbed by industrial adventurism and that this society could still retain some of the old certainties to which it had grown accustomed and had served the country well over the years.

“I said on May Day when I addressed the Barbados Workers’ Union May Day Rally, I defend to the death the right of trade unions to defend their constituents to the best of their ability. So, trade unions are not at risk, but process has to be protected…

“Process is important and what we are seeing here is a retreat from all of the traditions to which we have grown accustomed over the years, which have served us so well and which have brought us to 50 years of Independence…”