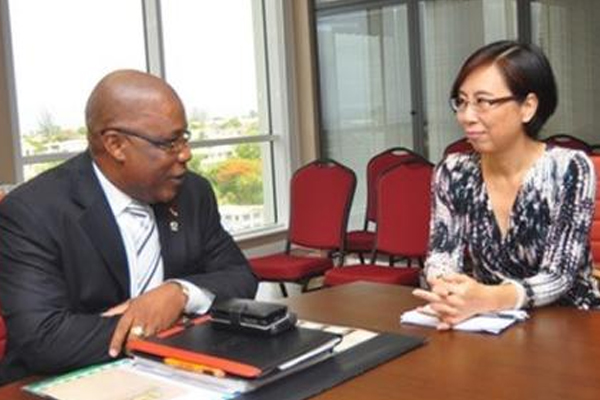 Bridgetown, Barbados (BGIS) — It will cost Barbados a projected US$30 million to execute a reef rehabilitation project to save and protect the island’s coral reefs.

Minister of the Environment and Drainage, Dr Denis Lowe, made this point recently, during a courtesy call with Chinese ambassador, Wang Ke.

During the visit, Lowe revealed that approximately 20 reefs, all showing signs of degradation, had been identified around the island.

“So this is a very important project for us because the reefs are critical to our tourism product and to our break water system which assists in reducing the impact of waves,” he said.

He added that there was an “immediate need” for Barbados to market its project on reef rehabilitation as a result of the threats being posed to the reefs.

The minister noted that officials from his ministry were seeking funding at either the grant or loan level to push the project which would result in the protection of the near shore system. But, he stressed, for Barbados to fix the challenges with its near shore system, it first needed to address issues related to sewage.

He pointed out that, with businesses along the west coast emitting their waste into the ocean, scientists believed that was contributing to problems being experienced.

The minister added that there was a further need to correct the problem of debris from boats and fishing vessels becoming attached to the reef system.

“We have an underwater world which, once protected, can be offered as a great offshore element to the island,” he said.

In her response, the Chinese ambassador said that China would be willing to give consideration to the project.