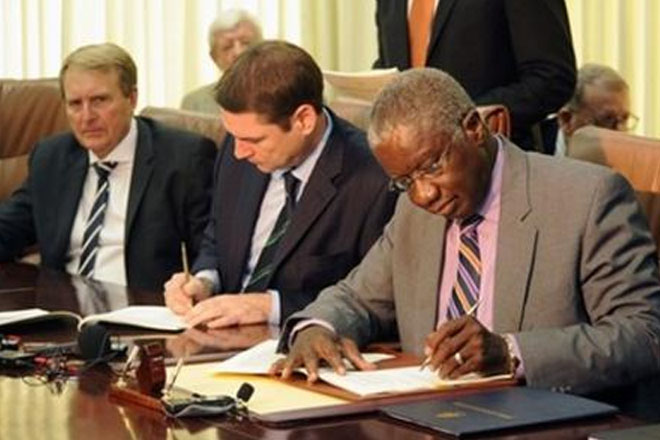 The two blocks – Carlisle Bay and Bimshire – are approximately 40 kilometres southeast of the island, and total about 5,000 square kilometres.

They are located in waters ranging from approximately 1,200 to 2,000 metres in depth. And, Stuart said that every Barbadian was a stakeholder in the offshore petroleum programme.

He promised that government would ensure the benefits derived from offshore exploration and production activities were spread evenly across the economic and social spectra for present and future generations.

“Signing these two exploration licences will send a clear message to the industry that Barbados is open for business and is serious about the development of its offshore petroleum sector.

“In addition, Barbadian nationals stand to reap early benefits on execution of the licences through the negotiated provisions for annual training, scholarships, local content, coastal and marine environment research and the acquisition of critical equipment and software,” he said.

Stuart stressed that government had taken great care in formulating a robust regulatory regime and legislative framework that would ensure all offshore exploration and production activities were undertaken in accordance with the highest industry standards.

The prime minister stated: “The government will expect no less than the highest commitment to the preservation and protection of our coastal and marine environment, as well as the communities in which BHP will operate.”

He disclosed that the division of energy was working closely with local stakeholders to formulate a comprehensive long-term petroleum development strategy that would inform this island’s future offshore petroleum policies.

Barbados had launched its first offshore licensing round in 2007 and the offshore territory was subdivided into 26 blocks, with 24 being made available for bidding. On conclusion of the process, BHP Billiton, headquartered in Australia, had emerged as the only successful bidder and was awarded the two blocks in 2008.

Stuart said that since then, government and BHP Billiton had engaged in intense, yet fruitful negotiations to finalise the exploration.

He stated: “Today, Barbados’ offshore petroleum acreage remains largely underexplored with both local and international geological experts agreeing that all the necessary elements for a productive petroleum system are present in the offshore.”

He noted that Woodbourne Oil Field was showing signs of steady decline, producing about 700 barrels of crude oil and 1.9 million cubic feet of natural gas per day.

“Expending such significant amounts of capital on the importation of fossil fuels has impacted government’s ability to allocate the desired level of financial resources across other areas of critical national importance such as education, health and social development.

“It is in this context that the signing of the offshore exploration licences for the Carlisle Bay and Bimshire blocks becomes increasingly important to Barbados’ energy future and the development of its people, goods and services,” he stressed.

The island’s history of onshore oil and gas production dates back to the 1800s and BHP Billiton is optimistic about its chances of discovering hydrocarbons within the Carlisle Bay and Bimshire blocks.

McCormack explained that the exploration process would proceed in phases, with each building on the other and dependent on the previous phase.

“We will begin to augment our understanding of this complex geology through a new 2D seismic survey programme of over 3,200 line kilometres. This survey will be conducted during the initial 3-year phase of the licence.

“If the results of this initial survey are promising, BHP Billiton may then elect to proceed into the next exploration phase to acquire and process approximately 1,500 square kilometres of 3D seismic covering both blocks. Given further encouragement, the next step will be the drilling of at least one exploration well in each block,” he said.

He pointed out that this incremental process was highly effective, and one that the industry had used successfully in oil and gas exploration and development around the world.

McCormack stressed that the benefits to communities where BHP Billiton worked went beyond revenue.

“We are proud as a company that where BHP Billiton is successfully producing oil and gas, we work to ensure these benefits are shared between our shareholders, our partner nations and their people,” he said.

He pointed out that BHP Billiton was considered one of the safest oil and gas companies in the industry, with a focus on environmental responsibility and the communities in which they work.

“The breadth of our resources portfolio, our historical operational performance and our long-term approach to resource development distinguish us from most other companies in this industry. And, we feel this strategic partnership with BHP Billiton provides the Government of Barbados with a distinct advantage,” he added.