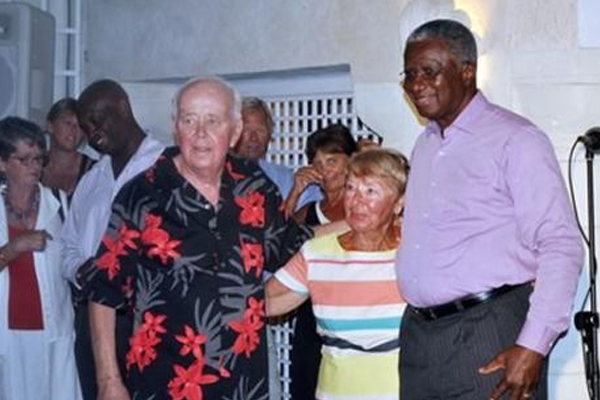 Barbados to preserve and build on tourism product, says PM

Bridgetown, Barbados (BGIS) — The government is committed to preserving, improving and diversifying Barbados’s tourism product so the country can continue to be on the cutting edge of the industry, Prime Minister Freundel Stuart said last Wednesday night when he addressed the second 2015 reception for repeat visitors.

Stuart told the tourists that a number of stakeholders had contributed significantly to their visits being enjoyable and he highlighted the Royal Barbados Police Force (RBPF) as one such organisation.

He continued: “I want to say thanks to the RBPF for continuing to do the excellent work which it has been doing in preserving and promoting this country’s security.

“I know that the Force maintains a regular connection with the tourism actors in Barbados, ensuring that like a sensitive seismograph, the Force registers all of those fluctuations taking place in the tourist community and making sure that it responds creatively and decisively to those changes.

“They are as important a part of our outfit, as the Barbados Tourism Marketing Inc. and the Barbados Tourism Product Authority… These two organisations have been doing marvelous work in ensuring that Barbados continues to be promoted in those parts of the globe where most of you have come from.”

Stuart pointed out that visitors had identified the warmth and charm of Barbadians as the appealing qualities which lured them to these shores, and insisted that the development of those qualities was no accident. He stressed that the government had invested heavily in education, which he described as a form of empowerment, so citizens could exercise a greater degree of control over their lives.

He told his audience: “For a country like Barbados, we cannot determine or control the price of oil; we have no control over all of the major events taking place in the international economy; we are in many respects victims of those events rather than being in a position to determine them…

Stuart thanked the visitors for showing confidence in the island and urged them to spread the word that Barbados is a slice of paradise.

Some of the visitors attending the reception included Elsie Manning from the United Kingdom, who was on her 67th visit; Paul Harmeier of the USA who has visited 54 times; and Canadians Jerry Pankhurst and his wife Margrit Fritschi, who have been here about 50 times.