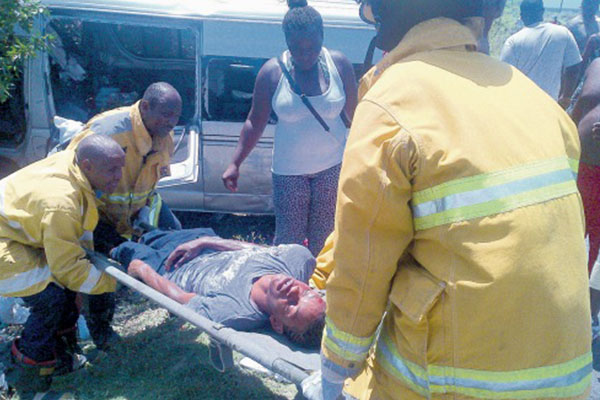 (CMC)– A young man carries this injured woman from the minibus shortly after it crashed in St Mary yesterday afternoon.

A beach outing turned into tragedy yesterday when a minibus crashed in St Mary, resulting in most of its approximately 20 occupants being injured.

At press time last night no deaths were reported to the Jamaica Observer, and the Oracabessa police said they had no information on the mishap.

The crash occurred at approximately 1:00 pm on the highway that links the resort towns of Ocho Rios and Port Antonio on Jamaica’s northern coast.

Occupants of the bus told the Observer that they were heading from Ocho Rios to a beach in Portland for a day of fun — a traditional holiday activity in Jamaica.

It was not immediately clear what caused the Toyota Hiace bus to run off the road into a ditch. However, persons on the scene were overheard complaining of bad driving by the driver of another vehicle.

Crash victims, some with blood streaming down their faces and other parts of their bodies, were pulled from the bus and taken to the Annotto Bay Hospital by passing motorists.

The driver of the bus appeared to have suffered severe injuries as he was bloodied and unconscious while being taken to a waiting car.

Police and firefighters rushed to the scene and helped to rescue the victims from the wreckage, while a doctor, who was passing, stopped and examined some of the injured before sending them off to hospital.